Iowa's D: "I hope you brought your punter."

Share All sharing options for: Iowa's D: "I hope you brought your punter."

Iowa fans, I'm gonna warn you ahead of time. This post has numbers in it. It pertains to your team, the Hawkeyes. If either of these facts annoys you, then it's time to stop reading. Head back to Iowa-friendly blogs and call it a day. If you enjoy viewing your team through the compound eyes of your opponent, then continue reading.

Today's analysis relates to opposing drives' end results, field position, and otherwise superfluous ramblings. The first idea I'm touching on is evaluating a defense based upon an offensive drive's end result. Also, we're negating the fact that both teams play against completely different schedules and offensive units. Therefore, in our analysis Jimbo Fisher's juggernaut = Tim Brewster's rotten egg. So here is the first set of data based upon opposing offenses against GT and Iowa's defenses. The % is the end percent of the time that an offensive drive results in either a punt, turnover, touchdown, or field goal attempt:

This chart doesn't account for QB kneels or special teams. Iowa has a comfortable lead on us concerning all of the major defensive statistics. The big one is forcing their opponents to punt 50% of their drives away. 50%!%!% That's great. That translates to 71 opposing drives ending in punts for Iowa versus only 45 for GT (and we've played one more game). The best drive for a defensive coordinator results in either turnover or a three and out and Iowa truly excels in these areas:

This is where the "Fire Wommack" crowd can chime in. We allow the opposing team to march down the field for either a touchdown or field goal ~40% of their drives. GT hardly ever forces a three and out. I think the high Iowa three and out average is not only a sign of good coaching but a sign of players that play hard every down because they have to.

They don't rely on their offensive brethren to win and need to force three and outs. As one Iowa commenter noted, "Iowa's defensive average is actually lower than the stats. We've given our opponents four touchdowns with interception and fumble returns for TD's." It reminds me a lot of the Tenuta defenses.

The final grouping of data I'm gonna pull out is the Iowan's favorite phrase, "Field position. Field position. Field position." I've put together GT and Iowa charts showing the starting field position of opposing offenses. The charts are broken down into four categories: Other, Forced to Punt, Scoring Attempt, and Forced a Turnover. Other takes into account drives at the end of game where the opposing offense ran out of time. Scoring attempts include touchdowns, field goals, and missed field goals. Turnovers include safeties, picks, fumble recoveries, and failed 4th down conversions. Please note, GT has never given the ball to an opponent inside the 10 to start a drive. 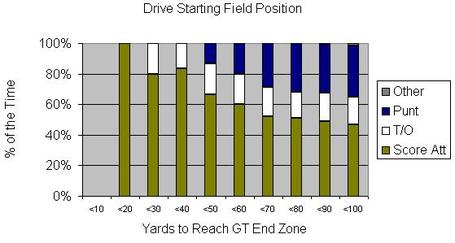 GT's chart above shows a relative lack of concern for where an enemy starts their drive. They will move down the field and probably score. Really, you gotta be about 80 yards away from our end zone to really give our defense a good shot. The Iowa graph is a little more favorable for their defense: 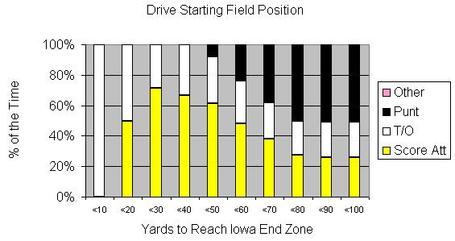 Iowa fans can safely assume that their defense will shut down their opponent anywhere past the 50 yard line. If an opponent starts in Hawkeye territory, it's still an uphill battle. Pretty interesting. Field position should be an important battle on January 5th. I don't foresee us punting very often unless CPJ feels that Wommack's crew can slow the anemic Hawkeye offense. Personally, I wanna see our offense on the field all game. I think America wants to see our offense on the field all game.