This came across the South Carolina telegraph wires:


Yakub, thanks for the suggestion and my answer to both questions is another question, "Does a bear sh*t in the woods?" 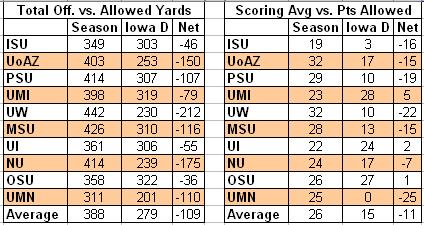 The above tables show how Iowa's opponents fared on offense against all of their BCS caliber opponents (excluding Iowa). The second column shows how well Iowa's defense kept them in check. The "Net" Column is Iowa's production minus the team's average. So, in the case of Iowa State. The Hawkeyes limited the Cyclones to 46 yards below their season average against BCS opponents and 16 points below their season scoring average against BCS teams. 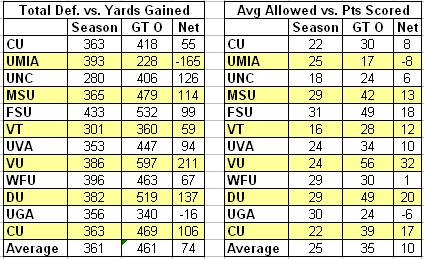 This table is the opposite of the previous. It shows GT's offensive fury compared to its opponents' defensive averages. So for example, the Tarheels gave up 126 yards over their season average against BCS squads and 6 points over their average scoring defensive effort.

At the bottom of both tables is the average. It's kinda interesting to see that essentially both schedules were fairly similar. The Big 10 schedule of Iowa averaged 26 points per game as the ACC schedule of GT managed 25. The Big 10 offenses racked up 388 yards while the ACC defenses gave up 361 yards. Seems like we've got pretty comparable schedules statistically speaking if you consider the fact that the average of the "Season" columns is pretty much interchangeable as offense/defense. The small amount of out of conference opponents only manages to skew the data so much from the actual conference averages.