Share All sharing options for: Iowa Motto: Workers of the world unite!

I started pouring over Iowa's play calling yesterday trying to find trends, interesting nuances, and intricate caveats to Ken O'Keefe's offense. I didn't find any. Iowa has the most plain, upfront offense ever. It's incredibly balanced with the pass and run. The quarterbacks distribute the ball evenly to three main wide receivers and a tight end. Two running backs split the load quite effectively. I excluded punts, field goals, dead ball penalties, QB kneels, and penalties that resulted in no play. Here's a look graphically at O'Keefe's play calling based on the down and based on the distance to attain a first down/touchdown: 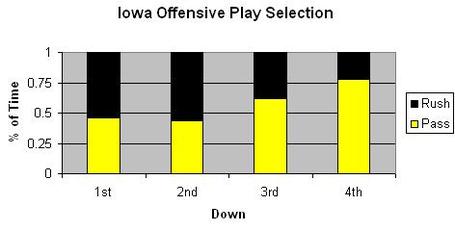 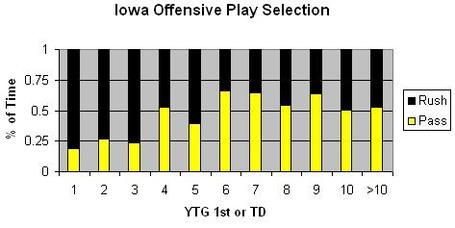 The two primary running backs for Iowa are Adam Robinson and Brandon Wegher. I want to pronounce that WEE-gurr so from here on out pronounce it that way in your head. Iowa fans, feel free to correct me in the comments. Based on the data, neither seems to have really separated himself from the other. Robinson gains about 4.6 yards per carry to Wegher's 3.6. Even though Wegher has more touchdowns, Robinson has a better nose for the yard to gain. Wegher has attained a first down or touchdown on 20.4% of his carries as opposed to Robinson attaining the first or TD 25.7% of the time. The following charts display the distribution of the football (looks) per back and the carries distributed based on yards to gain a first or TD. In both graphs, I mistakenly left wide receiver reverses and QB sneaks in the "Other" category so keep that in mind. 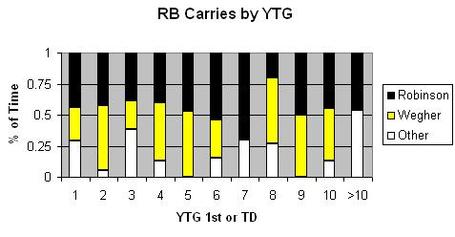 Now, the interesting thing about Iowa's offense, like most NCAA offenses is that passing routes are typically designed to gain a certain amount of yardage not necessarily positive yardage like a run play. The vast majority of routes(e.g. outs, slants, flags, etc.) are designed with the intent to get the ball to one specific spot and the receiver will be tackled immediately. If he breaks a tackle, then that's a bonus. So that's how these graphs following were thought up. I am assuming that most college offenses are 1 to 2 read pass plays so the play is called with the intended receiver in mind.

A breakdown of Iowa's receivers shows three dominant receivers and a tight end catching almost all of the passes (~65%). The main dudes are Derrell Johnson-Koulianos, Marvin McNutt, Trey Stross, and Tony Moeaki (TE). The three named dude is henceforth pronounced "cool-EE-anus". McNutt is pretty obvious/funny. Stross = "Straws". Moeaki will be pronounced mow-EE-ah-KEY. McNutt and Moeaki catch the touchdowns. DJK and Stross pick up yardage. Looks include incomplete passes. "Other" in this case includes everyone on the field not named Moeaki, McNutt, DJK, or Stross (may appear high due to stat keepers not keeping accurate track of incompletions). Also, the RB's in the charts are only Robinson/Wegher not backup dudes that see little to no significant PT. 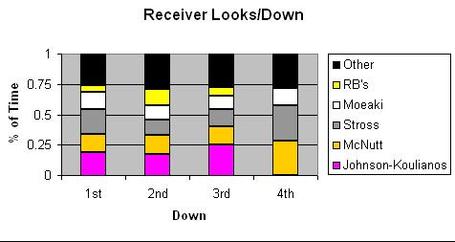 As you can see from all the charts and numbers and stuff, Iowa doesn't care who has the ball in their hands. Robinson has a little bit better grasp of his position than Wegher but he's not an astronomical upgrade. McNutt is the guy to key on in the passing game but he opens things up for Moeaki over the middle and the other two dudes. If Iowa allocates a good chunk of their offense to intermediate passing and really distributes the football, we'll have a tough time defending them.

I think a big key will be limiting Robinson and Wegher on first down. The "effectiveness" of Iowa's offense is predicated on maintaining the run-pass balance. It gives O'Keefe more flexibility in playcalling and keeps pressure off his freshmen RB's. Iowa's in the bottom half of the Big 10 in sacks allowed. And interestingly enough, Iowa has allowed more sacks on third down than any other down; allowing a sack 10% of the time they drop back to pass on third down. Derrick Morgan we need you to play big.