That's right I work for NASA...

Share All sharing options for: That's right I work for NASA...

Not really, but Jeezy does.  Hello SB Nation!  I'm really excited to have the opportunity to write for FTRS and share my thoughts with you!  But before I do the real work I'm supposed to do for the site, I am going to introduce myself and give y'all an overview of what I'm going to be doing here.

First of all, some of you might be wondering "What's with the name Tedward?"  Well my legal name is Edward, after my grandfather.  However, my mom didn't like the nickname Ed, so she decided she was going to call me Ted because she liked that better.  Anyway, at some point during elementary school or junior high (I really don't know when) someone started calling me Tedward.  And ever since some people have chosen to call me that.  I am cursed to go through life having to tell everyone a personal story every time they see my legal name.  Now you know.  On to other background info...

To begin, I am a senior at Georgia Tech graduating this coming Saturday 12/12.  I'll be moving to St. Louis in January for a job so I'll be going through a major withdrawal from Tech sporting events.  Hopefully writing for the blog will help me to cope with not being on campus.  I started at Tech in the fall 2005, same time as Dane and Winfield.  Tragically for them though, we really didn't become friends until I joined Reck Club last spring.  Although, I did talk to Dane many times at football games while heavily intoxicated and yell heckles for him after he lost his voice 10 seconds into every game.  I met Bird in 2007 through a roommate of mine and he gave me my first ride in the beloved Ramblin Reck after a baseball game in 2007, for which I am eternally grateful.  I'll save that story for a time when there's nothing else to write about.

As Winfield said already, my primary role here will be to give some insight into recruiting.  I plan to focus on mostly on football, but I'll be sure to pay some attention to basketball, and of course, baseball (recruiting and everything else) will be covered A LOT by me.  I have an unhealthy obsession with GT Baseball and Danny Hall during the spring months. I don't know what I'm going to do with myself this February once baseball starts and I'm not on campus.  That's a problem for another time.  More about how I plan to cover recruiting...

I'm not an "insider" into any of the programs so I wont' have any exclusive interviews with recruits, although it is a possibility down the road.  Instead I'll just try to give you my impressions of our recruits after they give us a verbal commitment.  For someone who's obsessed with college sports as much as myself, I believe all this coverage of recruits done by some websites is slightly out of control.  I plan to only discuss those who have committed to come to Tech and give you all a brief overview of who the person is, where they're from, maybe some highlight videos, etc.  That's the plan for now.  And as for baseball, well I plan to talk about that a lot too, because we have one of the greatest programs in the country and not nearly enough people pay attention to it.

The reason I'm interested in recruiting is because I feel like I've helped recruit a number of people to play football at Tech.  How is that possible you ask?  Well I'll tell you one of the many stories I have about talking to various football recruits over the years.

My buddy Jose and I were members of Swarm for as long as we knew each other here and would get to the stadium over an hour early in order to stand in the front row.  Usually we were highly intoxicated for these events (what else would you expect from a friend of Dane and Winfield?) so we had no problem talking to strangers, especially strangers that could potentially help our team down the road.  And since the recruits stand directly in front of Swarm when they watch warm-ups, we would just strike up conversations. In fact, during the 07 and 08 seasons, the guy responsible for coordinating the recruiting visits (can't think of his name right now) would bring over the recruits the coaches coveted the most to talk to us.

Our greatest "get" was the former WR commit turned Alabama WR, and current A-back Chris Jackson.  Jose and I began talking to him back in 2006 when Chris was just a Junior.  Chris was the first commitment in our 2008 class and was supposed to be the second coming of "the ambassador" Kyle Jackson from the 2007 class.  During the fall of 07, Chris remembered us from the year before and would talk to us at every game.  I even remember taking pictures with him and his family at some point.  Basically, my friend and I were partially responsible for him wanting to come to Tech... and then Chan got fired.

As you may already know, Chris Jackson was one of the players who rescinded his commitment after the firing of Chan and the hiring of the great one himself, Paul Johnson.  I remain convinced that his defection is entirely due to two assholes named Buddy Geis (WR coach under Chan who couldn't coach for s**t... seriously, could you imagine what Buzz Preston would have done with Calvin Johnson?  I mean look at Bebe Thomas.  That guy doesn't have half the talent that Calvin has and yet, just as Dane said earlier, he's JUST as exciting to watch sometimes.  UGH, that's a story for another day as well) and Jeff Collins (recruiting guy under Chan who obviously sucked greatly as well) who convinced Chris to go elsewhere (to Alabama) just because they were bitter about losing their jobs.  I only wish the worst to those former "coaches".  Anyway, I'm still bitter about those events as  you can tell, but Chris has since transferred back to Tech and will suit up for the Yellow Jackets at A-back next fall.

It is stories like those though that have given me a distinct interest in the recruiting process.  Getting to know someone the way Jose and I did during those to years with Chris Jackson (although I doubt he remembers us) really gave me another level of attachment to the GT Football program.

Some other things you may or may not want to know about me: I hate Georgia more than anything in the world including the Devil; I think that Young Jeezy is the greatest recording artist of this generation and the next; I regard Danny Hall as a living Deity, not a human being; I think that Paul Johnson is the smartest and sexiest man alive (I promise I'm straight as an arrow though) and he too is most likely is not a human but a Deity; I only drink whiskey and beer (except Miller Lite cause I think it's awful and I don't care what you think about that), but I will go for tequila on occasion (ask me about Charlottesville this year); I have a strong dislike (to say the least) for gingers and hippies similar to Cartman, one of my heroes.

Like I said I'm really excited that Winfield has asked me to contribute and hope y'all enjoy reading what I have to say.  Hopefully I can add to the FTRS experience.

Anyway that's all I've got for now.  I have my last final at Georgia Tech tomorrow and I haven't studied at all.  I've never been less motivated for anything in my life. 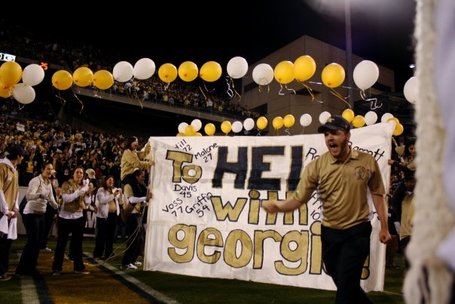 TO HELL WITH GEORGIA!