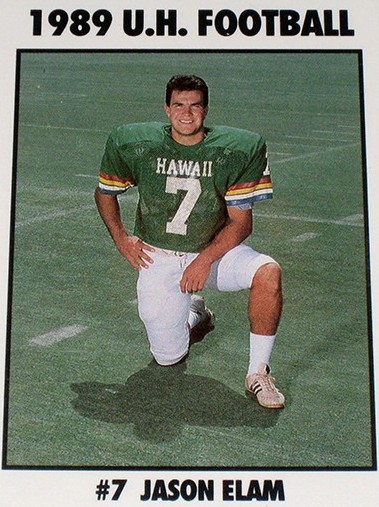 In an effort to find some sort of coaching tree connection I stumbled across two overlapping encounters between Iowa's Ferentz and GT's Johnson. Both coaches were key figures in two match ups off the mainland. The first one involves Ferentz's mentor, Hayden Fry, putting the Hawkeye squad on a 9 hour flight to Honolulu. Ferentz was the offensive line coach for the Hawkeyes. The Hawkeyes had defeated the 1984 Rainbow Warriors handily in Iowa City and anticipated an easy win in the 1988 season opener. Little did the Hawkeyes realize they were running into a buzzsaw known as the 1988 Hawai'i offense - a team that would average 32 points/game. The Hawkeyes didn't have to face future NFL great Jason Elam as he was being redshirted. After the 1988 meeting, Iowa finished the season 6-4-3 going on to lose to NC State in the Peach Bowl and Hawai'i failed to reach a bowl despite winning 9 games.

The second meeting of the two coaches was even worse for Ferentz's boys. He enjoyed the trip (not the game) in 1988 so much that he brought his Maine Bears out to Hawai'i for an epic ass kicking. Paul Johnson's 1990 offense put up 44 points on a hapless Bears team. The Bears had lost four straight going into the 1990 game and didn't mind making the 12 hour flight to Hawai'i a fifth straight loss. Also, redshirt sophomore Jason Elam kicked three field goals and five PAT's in that game.