Fifty nine coaches vote in the Coaches' Poll. Paul Johnson doesn't vote in the poll so we take the poll's result as little to no meaning. However, there are some interesting trends in the USA Today Poll concerning GT's final regular season ranking of #10. I sorted all of the coaches by state, conference, and whether or not they played GT this season.

First and foremost, the best friends and worst enemies of GT are interestingly SEC coaches. Rich Brooks and his Kentucky squad rallied to beat a foundering Georgie squad. Then, he watched Tech struggle defensively against that same preteen offense. Rich Brooks voted us #15, the lowest vote received in the poll. Dan Mullen witnessed the firepower of a fully operational battle station. He, alongside Navy's Ken Niumatalolo, voted Tech at #7. So, using Dan's vote and 6 other opponents of Tech's, we see an average vote of 9.57th place. Non-opponents of Tech averaged 10.50th place. Obviously, we impressed Dan Mullen. Only Coach Cut and CMR voted us lower than 10th (both at 11). 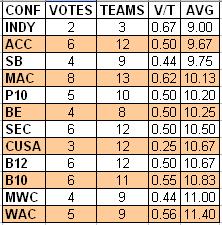 The above table shows conference affiliation, number of voters, number of teams in the conference, number of votes/team (relative conference voting power), and the average vote given to GT. Breaking down the votes, we see Navy and Charlie the Chocolate Factory shooting the independent vote up super high. Naturally, the ACC brethren were second place. Our West Coast buddies that haven't seen a GT game all year have us ranked super low. 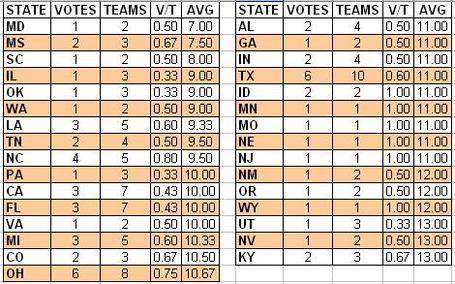 The breakdown by state kinda shows a little bit of West Coast negative bias. It doesn't make much since as the last Western teams CPJ faced were Air Force Academy and maybe Stanford. You'd think the West Coast would love shootouts since that's what they live and die for. Generally speaking, there aren't enough points to really draw conclusions. I just like looking at who's voting for who and the politics of the USA Today poll.

Another interesting concept is regional and conference voting power. The most powerful conference-affiliated voters are the MAC and WAC, which I find interesting. Their conference has the most votes/teams, which would mean you'd wanna schedule and beat WAC teams to reinforce your Coaches' Poll standings. Votes/state teams is not nearly as important because generally teams lean towards their own conference not their home state (e.g. CMR keeping UF at #3 despite their crushing loss to UAT).