Georgia Tech defeated Wake Forest in an exciting (but in all the wrong ways!) game Saturday evening, proving that, even when their backs are against the wall on 4th Down and 1, the Yellow Jackets finish on top. The Deacons never said "die" and took us to the wire. Riley Skinner, Wake Forest's record breaking quarterback, had a solid performance against the Georgia Tech defense going 26-for-40 for 263 yards and 2 Touchdowns. However, when the going got tough and the Jackets had nothing but will to earn the victory, Derrick Morgan reached back and threw Skinner to the ground and then let Josh Nesbitt take over.

Three teams in the top 10 lost on Saturday, and we were pushed to the outer limit until we simply proved to be the better team. I was 15 feet away from Josh when he ran in for the game winning touchdown and it was truly a great moment to see our leader do what he does best and prove his worth and value to Georgia Tech as he saved the season. 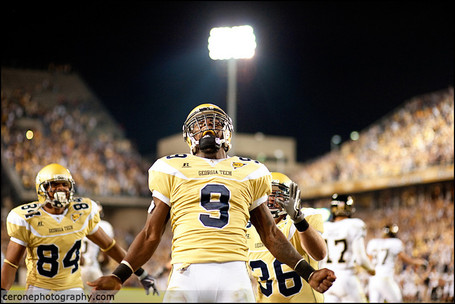 It's interesting to note that the spread on our game was 15 points which tells me that Vegas doesn't know how to approach Wake Forest or what to do with our offense. Through Virginia Tech, all spreads for ACC games were no greater than 5 points. Then the Deacons come in as 15 point underdogs but have lost 5 games by a total of 13 points. Weirdness.

I heard someone on ESPN say a while back that to win the national championship, you need a little bit of random luck. Close games happen and teams don't always come out 100% but the better team finds a way to win no matter what it entails, just look at Florida or Alabama.

Josh Nesbitt is a warrior. (If you haven't read this article about why he should win the Heisman, STOP, read it now, and come back). His passing is still iffy although I can think of about 3 easily dropped passes by his receivers.

Let it be known...If we still have Chan the Man as our coach, we kick the field goal, play it safe, and somehow manage to lose the game. It's the Paul Johnson. He exudes confidence. (More on this later in the week). Our team showed grit and determination. We're 9-1 and I am satisfied with the season so far. Now it's time for Duke and time to claim a crown.