Do you know what the Bizarro World is? It's this anti-universe where everything that's supposed to happen doesn't happen. Everyone that's good in the normal world is evil there. Well, Wake Forest is currently in their Bizarro 2006 Season. In 2006, the Deacons were 5th in scoring defense against the conference. Now, they are tied for 9th just above the piss poor efforts of NCSU and FSU. In 2006, the Deacs didn't need a bunch of points to win because their defense played lights out. Now, they're getting punched in the face by ACC offensive coordinators. 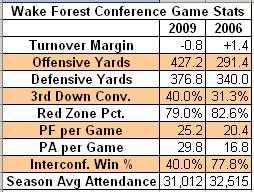 Remember all of the luck that Wake needed to make the Orange Bowl in 2006? Well, Karma has caught up to Wake and is currently biting them in the proverbial ass. Riley Skinner is no longer the redshirt freshman that keeps Wake Forest alive in close games. He's the average senior quarterback that can't make the game winning throws.

Wake was second in the league in turnover margin in 2006. Their credo was, "Smaller, smarter football. Don't turn the ball over. We don't have the talent to make up the points lost off of turnovers." Well, this year Wake can't hold onto the ball. They're just above NC State and Maryland at 10th in turnover margin (GT is the best, by the way in 2009 even with 10 lost fumbles).

Wake's bizarro season is not looking good with Riley Skinner at questionable for the GT game. Wake needs to go 2-1 in their final three games to make a bowl. Their final three are GT, FSU, and Duke. I don't see them winning any of those three just because their offense isn't potent enough. They don't have the horses to run with 2009 ACC offenses. Jim Grobe is gonna need to change his style of football for 2010, in my opinion.

Predictions
Bird: GT handles Wake. Wake is a better coached Vandy but we're at home and the defense shows up to play at home. GT 35, Wake 21.
Winfield: The Triple Option takes advantage of Wake Forest for the 2nd time this year. GT 42 Wake 17
Dane: Sorry, I was trying to predict but then I got drunk. Anyway, GT 45 Wake 21.