Scoring - Us vs. Them

Share All sharing options for: Scoring - Us vs. Them 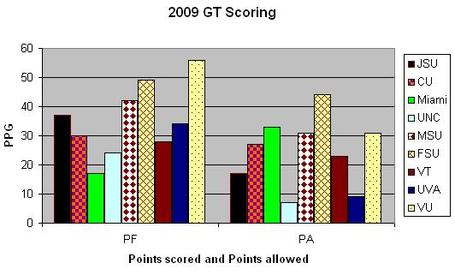 After getting those random facts out of the way, I wanted to look at our scoring averages so far on the season. The first thing is points scored versus points allowed on average by opposing defenses. Below is a table with three columns of data. The first column indicates our opponents' points allowed per game against I-A teams (PAPG). The second column is what their average points allowed per game would be without GT (NOGT). The third column is how many points GT scored over their respective season average on defense (GT NET). So a quick example would be Vanderbilt. They're giving up 22 points per game against I-A schools. If you take away the GT game, their defensive average goes down to 17.8 points per game. GT scored 56 points, which is 38.3 points over Vandy's I-A defensive average (excluding GT game). 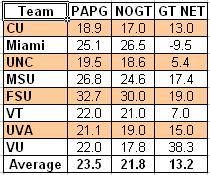 The next set of numbers to look at is scoring by quarter. How is GT adjusting? How is GT preparing for opponents? GT's coming out incredibly strong in the 1st quarter. Punching their opponents in the face and taking their girlfriends. The second through fourth show scoring just enough to keep the first quarter lead aka Ball Control Offense. 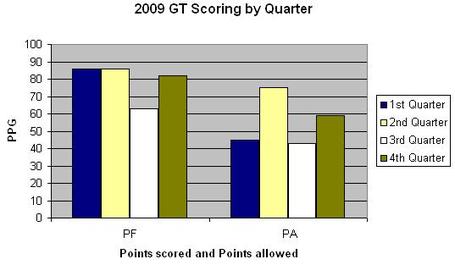 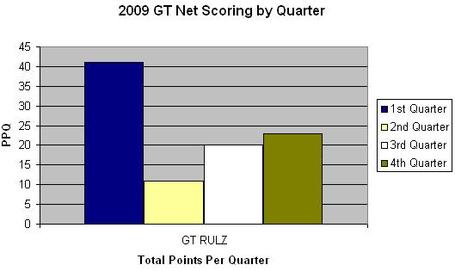 Edit: This chart is incorrectly labeled.  It indicates the net points we've scored per quarter this year = (Our Points/Quarter - Their Points/Quarter)

For me, the best indicator of GT's current offensive and defensive states of mind is the scoring by month. GT was scoring 27 points per game in September and allowing 21 points per game. GT surged in October and scored a whopping 42 points per game and gave up 28 points per game. We gave up an extra touchdown to gain two more touchdowns per game. I don't mind winning 42-28. It's easier on the heart than winning 27-21. However, better defense and better special teams would result in even better net scoring numbers, in my not-so-humble opinion.