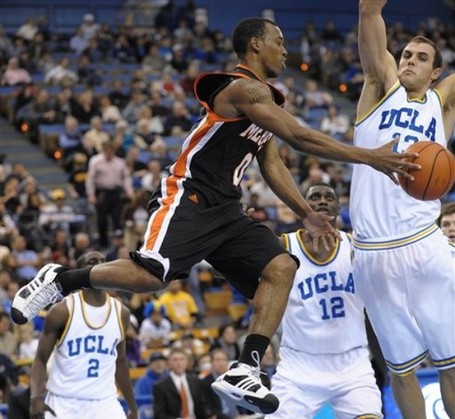 Today's guest blogger is my little brother, Matt. He's a Mercer student and basketball fan. The OT loss last year to the Jackets was one of the toughest losses Mercer's had to deal with since the 1920's. This year Mercer is a favorite in the Atlantic Sun. Here are the questions I sent him and his responses:

1. Who are the stars of this year's squad? Who should Tech fans watch for when Mercer comes to ATL?
Well, the obvious stars of this year’s team are six foot one guard James Florence who has been racing up the Mercer and Atlantic Sun Record books with his Career scoring average at 19.7 points a game. His man in the middle is senior forward Daniel Emerson who is averaging a double double for the season and was able to grab 12 rebounds against Florida State's pair of 7 footers with sheer power and determination. Not to be overlooked is perhaps MU's most versatile player in six foot seven junior forward Brian Mills from Douglasville, Georgia who is averaging seven points and six rebounds a game while shooting 60 percent from the field and 40 percent from behind the arc.

2. What happened against FSU? I see James Florence shot 3 for 15. Was he just off or did FSU smother him?
What happened against FSU was just a sheer mismatch of size and athleticism, though a few bad calls from the refs could also be taken into account. As far as J Flo is concerned, unless you are Michael Jordan it's impossible to score in the inside with four bodies on you once you leave the arc.

3. The starting line up for Tech averages six and a half feet. How does this year's group of Bears match up with Tech's height?
The tallest Mercer player is senior Daniel Emerson at 6'8". While our most dangerous threat to score from anywhere on the court is senior guard James Florence at 6'1". While the height mismatch is there and it was shown the FSU game, this Mercer team also showed it can play with the big boys like it did with wins over Auburn and Alabama last year and a two point loss to Providence this season.

4. Does Mercer have the passion to bounce back and play Tech tough like last year? Or will we see another FSU style romp?
Under Coach Bob Hoffman, Mercer has shown it has the fight to be in every game. Even with last week’s loss to FSU I can see them taking Georgia Tech to the wire and possibly giving them another scare. James Florence doesn’t typically have sub 20 point games in a row so it should be interesting.

5. Give us a late preseason ranking of this year's Division I basketball teams in the State: Kennesaw State, Georgia State, GT, Georgia Southern, Mercer, and uga.
I see KSU finishing middle of the pack in the Atlantic. Georgia State is always a good team and they should do fine this year and maybe make a bid for the NIT. GT could evolve into a top 15 team and make a strong tournament run while challenging for the ACC. I would put Georgia Southern in the same boat as Georgia State. Mercer I believe has its best shot at taking the Atlantic Sun in years and being a first round pest in the tournament. UGA should finish around the bottom of the SEC.

That's it for the Mercer questions. Post your in game thoughts and comments. If you wanna rant about CPH or just talk smack about uga, feel free to do so too. Tip-off is at 4:00 pm. Game is on radio but should have plenty of cheap tickets available at gate.