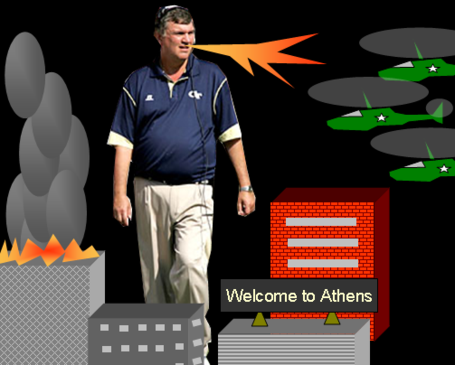 First, let's start by understanding the history of this rivalry. Read this article on wikipedia. I find it particularly interesting that the worst acts ever committed in the rivalry were by Georgie fans yet they claim they don't care about the rivalry. We belittle them in our fight songs but they question our patriotism in parades, throw rocks at our football team, and stab our mascots. There's a difference between supporting a good, old fashioned rivalry and poor behavior. Historically, Georgie loves to cross the line.

So let's look at some numbers from history that pertain to this coming Thanksgiving game:

Why has Georgie lost 5 games?
I'd say most Georgie fans would say that Georgia cannot hold on to the football. Looking into their turnover margin indicates a pretty desolate group of statistics. In I-A losses, the bulldogs had a -2.6 turnovers/game. In I-A victories, it was only -0.8 turnovers/game. So the bulldogs are making a lot of mistakes in winning and losing efforts.

Another talking point for bulldoggies is the play of their quarterback, Joe Cox. However, I'm not really buying the hate. Joe Cox is the second-best rated QB in SEC games this season just behind Chris Leak's backup. Bulldog fans came into this season knowing that Joe Cox was a career backup thrust into the limelight due to an early departure. They shouldn't have been expecting the second coming of Eric Zeier. Mark Richt can only recruit for what he does and doesn't have. You can't tell high school kids, "Oh that Matt Stafford will be gone by junior year." Sorry, that's not how it works.

The lack of a legitimate running back has limited Georgie big time. Their rushing attack is sporadic at best averaging 139 yards in I-A wins and 109 yards in I-A losses. 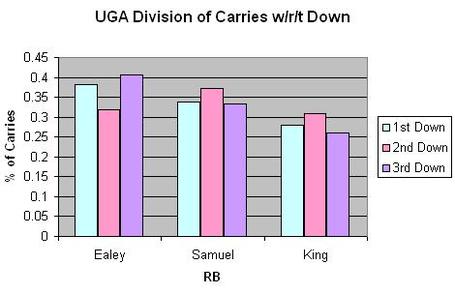 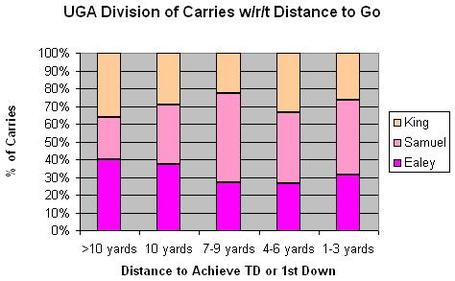 A look at the division of carries based on down and distance shows that UGA really doesn't have a primary back. Different guys have played in different games. There's a little more confidence in Ealey concerning play calling as he's getting more first down carries but for the most part plays are called the same no matter the guy in the backfield. To me, that means there's no game breaker back there if Richt and company haven't settled on a solid running back.

And honestly, putting all of the blame on a particular SA's shoulders is pretty lame. I'm a Blame-Pat-Nix-man so whenever my team's offense struggles, I blame the person directly responsible for game preparation, quarterback coaching, and overall offensive philosophy.

The Bobo Effect
I wanna attack Bobo's play calling like I broke down CPJ's earlier (I, II, & III). Due to limited time, this'll be slightly truncated. 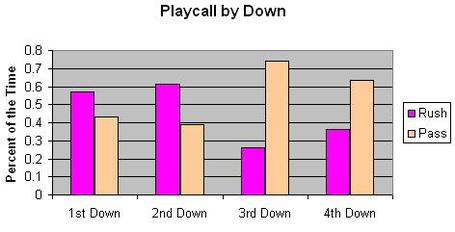 If you look at Georgie's playcalling on the season, it's like a 10 year old losing in a video game. There's frustration when little yardage is gained on first and second down and the run is completely abandoned on 3rd down. Georgie passes 74% of the time on 3rd down. People call us unbalanced. At least we have an offensive identity. Bobo's idea of play calling is simple: run fail, run fail, pass, repeat.

The interesting thing about Paul Johnson's offense is that the offense is simply meant to gain yardage. If a defensive player misses a tackle, it's a touchdown. In passing offenses similar to Bobo's, plays are designed to achieve a certain amount of yardage thus limiting your play makers. A "pro-style" offense limits your playbook based on yardage and personnel. Hence, we see interesting trends in Bobo's pass play calls: 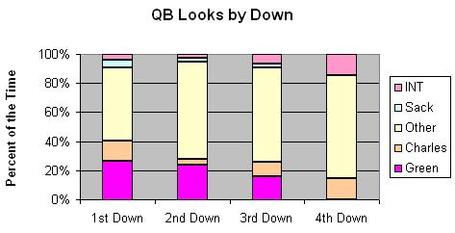 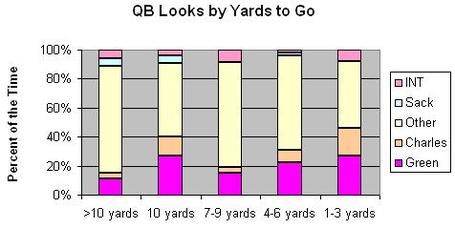 Looks are pass attempts to a certain player either completed, incomplete, or dropped (all kept by uga game stat keepers, blame them for mistakes). I was kinda amazed at the relatively low numbers for A.J. Green. It seems he's only really getting the ball on 1st down or in short yardage situations. I guess it makes sense that uga goes to A.J. or Orson Charles for those short yardage plays. I guess I just find fault in not utilizing your ONLY good offensive player more. Here's some perspective - Calvin Johnson caught 42% of GT's 2006 completed passes while A.J. Green has only caught 28% of uga's this season. The talent level disparity from 2006 Calvin to James Johnson is not that much different from A.J. Green to Michael Moore or Tavarres King this season.

Note (11/27 1:15 pm): FTRS reader Howell asked to see a breakdown of the progression of carries that the main running backs of georgie have received YTD. Well, Howell. Ask and you shall receive! It seems with Samuel's absence, both King and Ealey have seemed to have been told to pick up the slack. 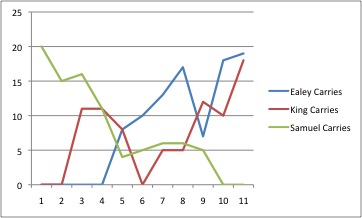 Conclusion
I think GT will struggle against Georgia's passing offense but hopefully some Joe Cox misfires and sacks will keep GT's rushing attack consistently on the field burning clock. I'm worried about this being an FSU-type affair. Hopefully, Dave Wommack realizes people are really scrutinizing his defense these next couple of weeks. That means do your homework. Learn your opponents' tendencies, plays, etc.. Focus your defense. Now is not the time to give up 250-300 yards passing. Our common opponent, Vanderbilt, ran it up and down on us yet Georgie's lamented D handled them. Wommack, it's on you to stop Georgie.

Bird: The combined scores from point #5 for those three wins are my prediction of Tech 30, uga 13.
Winfield: It is time to tell the mutts that we are in control. Make them piss themselves and make them leave Bobby Dodd early because of our celebrating. To Hell with Georgia. It's time to wipe them off the face of the Earth. 54-10 Jackets. TO HELL WITH GEORGIA!
Dane: We spot them a few, for a grand finale of 31-10.