I'm gonna let Winfield and Dane handle a majority of the football stuff this week. Then, I'll be able delve into the new basketball season a bit more. I think the Puerto Rico Tournament gave Paul a lot of good information about his squad heading forward. I don't know if Hewitt expected to see Peacock go off like he did against Boston but I'm personally pretty happy to see 22 bench points from one guy. A look at the division of minutes and shot attempts shows us who is getting the PT on Hewitt's squad right now: 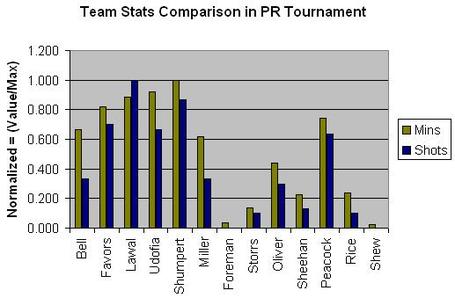 The stats are from Puerto Rico only as all three games utilized Paul Hewitt-fight-mode not Paul Hewitt-patsy-blowout-mode as far as substitutions were concerned. We've got an obvious starting 5 of Mfon Udofia, Gani Lawal, Derrick Favors, D'Andre Bell, and Iman Shumpert. It looks like Maurice Miller, Zachary Peacock, and Brian Oliver will be the key bench guys while Lance Storrs, Brad Sheehan, and Glen Rice come in periodically. Not much of a surprise other than the meteoric rise of Mfon Udofia. Now, looking at efficiencies: 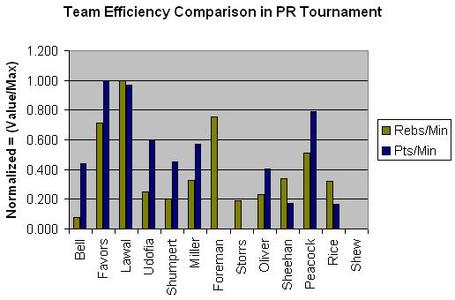 Gani and Derrick are killing the boards and killing the basket right now. Per minute they are our most efficient rebounders and scorers. Nick Foreman's stats are super high because he played 3 minutes and picked up a board.

Look for guest Mercer guest blogger later this week... What are your thoughts on the team thus far? Any observations from Puerto Rico or FAMU games?