Share All sharing options for: Dwyer running with more purpose and drive

"I’m running with a purpose (now)," Dwyer said. "Ever since last week, a couple guys on the team challenged me to run the way they know I can run," Dwyer said. "I watched old film from last year and things like that. If plays weren’t there, I still made plays."

Jonathan Dwyer threw himself upon the national stage last year, running for 1,395 yards and averaging 107 yards a game and claiming the ACC Player of the Year award. As 2009 approached, the public lauded JD with possible Heisman contentions and additional awards. However, he started out slow and didn't seem to have that bang-bang play as much that we all so vividly remember from last year.

These thoughts quickly turned into words and statements such as "Jonathan Dwyer isn't having quite the year we thought." or the most ignorant statement "JD is not going to the NFL because he is having a poor year and his numbers are nothing compared to last year."

Well, my friends let's stretch those minds of ours and actually do some research.

Everything seems to be on track to last year. If he continues on this pace, he will have a numbers year very similar to last. This can be attributed partially to our offense and the philosophy of making the read and sharing the ball with the right player.  So for 2009, enjoy Dwyer running with a reason and running with a purpose. He's got his fire and got his determination [back] and we'll most likely be missing him in 2010. Below is a chart showing the percent change in types of carries for Dwyer from 2008-2009. 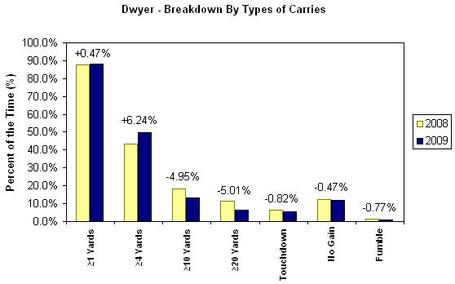