Josh Nesbitt has accumulated 2,265 yards of total offense this season on 343 plays. He's also GT's most penalized player (according to the play-by-play guys on RW.com). Nesbitt has racked up 7 penalties on the season: 6 delay of games and 1 celebration penalty. A measly 45 yards in penalties. There are 24 penalties that were not assigned a player's name either because multiple players caused the infraction or the penalty was declined and the stat keeper didn't take the name down.

GT has been credited with 74 penalties on the season but only 65 of them were accepted by our opponents. A grand total of 525 total lost yards due to penalties with a 53:21 ratio of offensive total penalties to defensive. Only FSU and Miami have accumulated more penalties in conference games than GT (we've also played more conf. games than most ACC teams).

GT's most common penalty is the offensive false start typically triggered by an offensive lineman out of sync with the snap count or an A-back moving too soon. The second and third most common penalties are holding and illegal blocking. If you were to divide GT's penalties into three basic categories of dangerous plays, procedural infractions, and subjective calls the breakdown would look like this: 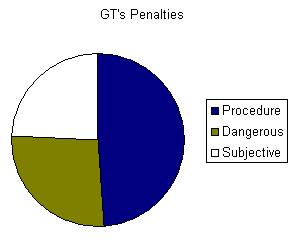 I put holding and pass interference into "subjective" because those are usually judgment calls and typically not as dangerous as roughing the kicker, late hits, etc.. I didn't put the ratio but it goes like this for the above chart P:D:S = 36:20:18.

Now, here's an interesting take on how good Derrick Morgan is. He's leading the conference in tackles for loss and sacks and has not been called for roughing the passer or a late hit, yet. The only two times we were called for RTP were on blitzing linebackers. Morgan gets in and gets the ball carrier. That's it. I respect the cleanliness of our defense. Here are the penalties for our defense broken down by pass interference (PI), rough the passer (RP), offsides (OS), and late hits (LH): 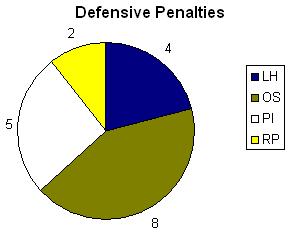 Offensively, we get called a lot for holding and illegal blocking. I'm assuming most of the illegal blocking calls are chop blocks and the holding is typically on pass plays or edge run plays. I imagine the splits are tough on interior offensive linemen and pass blocking. Here's the breakdown of unsportsman like conduct (US), holding, illegal blocking (IB), late hit (LH), false start (FS), and delay of game (DOG): 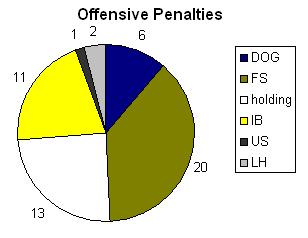