How CPJ plays the game of field position

Share All sharing options for: How CPJ plays the game of field position

After this weekend's victory and a mild outcry of complaints about analyzing our offensive tendencies, I pulled up some stuff that is a little less controversial yet equally interesting: GT's starting field position this season and the end result. Most people call it the "Game of Field Position". First, let me give you the basic stats. GT has had 130 drives not counting the two kicks returned for TD's and an interception returned for a touchdown. GT's average starting field position is its own 33 yard line. Here's a break down of types of end results we've had, the count of that end result (Drives), total yards to drive for a TD on all of those drives combined (Yards), and the average starting field position (FP). For example, the first row is Field Goals so we've had nine drives resulting in made field goals and started on average around the GT 43 yard line: 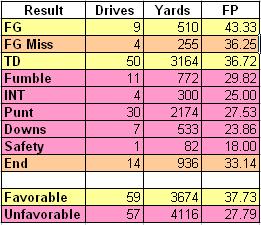 I color coded the end results by favorable (yellow), neutral (orange), and negative (pink). I guess a missed field goal is kind of a negative but I just put it into the neutral since we didn't score, we didn't give up terrible field position, and we at least had a shot at a scoring drive. I like this chart because it really shows that good field position results in positive outcomes. There is a ten yard starting field position difference between favorable and unfavorable. Pretty interesting. The next chart I've come up with is broken down by percentages. The starting field position for each drive is on the x-axis (in distance from opponents' end zone) while percent of the drives at that distance are on the y-axis: 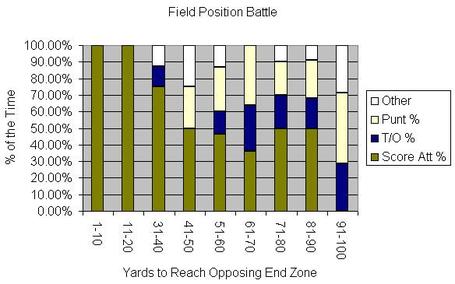 Other accounts for drives that end the half or game. Score attempt % includes missed field goals, made FG's, and touchdowns. T/O % includes fumbles, interceptions, and turnovers on downs. Punt % is obviously punts. I guess it's kinda scary that nothing positive has ever really come from a GT drive starting inside the shadow of our own goal post.