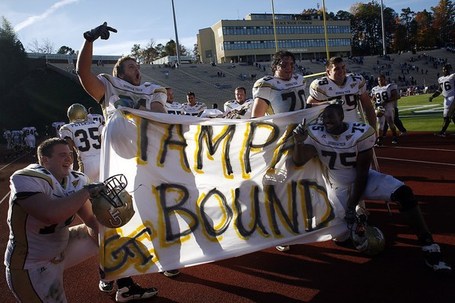 There is not as much to say about this one. It was business as usual in the office for Georgia Tech as we did what we needed to do: win and win soundly. Though someone should give Jarrard Tarrant and Orwin Smith some sticky tar to get rid of those butterfingers. As we all expected, Duke came roaring out and then we slapped their mama!  49-10 ACC Coastal Champs.

Oh, and Duke's "Tailgate" is wow, just wow. It's a straight up party where anything goes. I don't really know how to describe it all but I strongly approve of Tailgate and that my last away game roadtrip was ended in style. 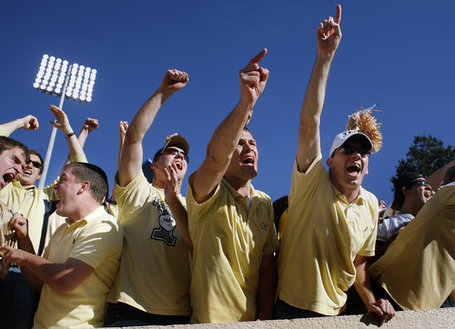 Celebrating Step 1 of the ACC Championship

ACC Coastal Champions. Feels good to say doesn't it? ACC Champions will sound even better in three weeks. Know what else sounds good? 10-1. The Duke win solidifies our first 8 game winning streak since the Bobby Dodd era and like I said earlier, the Duke win isn't special in the fact that we beat Duke. What is special is what the win meant and where it puts us as a program.  Georgia Tech is now staring down the eyes of history as a win against the Bulldogs will put us one game away from tying the all-time wins record. Win out the rest of the season and you have a school record in wins and arguably the one of the best seasons in history.

Paul Johnson has brought a confidence back to The Flats. Countless times over the history of the program under other regimes, we have had our hearts broken. It's something that you begin to expect as something always lurking around the corner. Being a Tech fan brings cynicism. But these past 2 years have taught us optimism. They have taught us to not fret when down by 2 touchdowns or on 4th down in overtime with the season on the line.

The ACC season is all but wrapped up. There is just one more thing to do: win the conference and beat Clemson (probably) again. BUT FIRST, we have a game of high importance but of a different importance on our hands. The Georgia Bulldogs are having quite the average season and would want nothing more than to spoil our season with a win. Paul Johnson will have his team ready and I, as a fan, will be ready for the beatdown of the dogs as we don't let up and win state.

To Hell with Georgia!