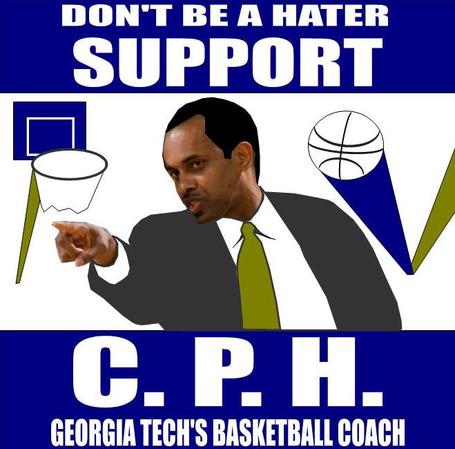 It's BASKETBALL SEASON!!! Woohoo! Don't let Winfield's haterade taint your dreams of Final Four runs. Let's look forward to a great season. I'm gonna track CPH's approval rating game to game this season and see what kind of trends we see from the GT basketball fans. So if you don't mind answering the poll at the bottom, we'll just log it and move on. I'll leave the polls open until the next game on the schedule.

FAMU Preview
RW.com has a great preview of the game right here including pregame statistics and series history information. All of which, I can't readily look up on my own because whoever runs RW.com doesn't want to update the historical data files anymore, damnit. The FAMU game is the first of thirteen possible out of conference games.

The Rattlers aren't a particular good bunch. They return a "seasoned backcourt" with likes of David Buchanon, Brandon Bryant, and Dale Hughes. Those three accounted for 39.4% of the Rattlers' points last season despite only accounting for 31.1% of the Rattlers' minutes. Look for #12, #15, and #25 if you're going to the game on Saturday night to lead the Rattler attack against the Jackets.

Post your thoughts if you're going to the game or thoughts after the game! Look for Winfield's Epic GT Basketball Squad Preview Next Week!