The Passing Offense of a Running Team

Share All sharing options for: The Passing Offense of a Running Team

Parts I and II of this statistical analysis were completely focused on running the football because we run the ball 80% of the time. Finally, we can talk a little about our passing offense thus far in the season. All of the sports analysts would typically dub us a run first team but interestingly enough we like to pass first: 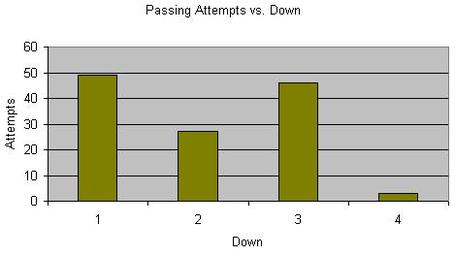 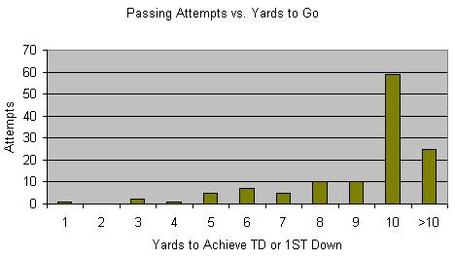 We like to take risks on 1st down as a majority of our passes are on 1st down but if 1st and 2nd down are stuffed or incompletions, we'll take shots downfield as well. Both of these facts are evident in the charts above as we almost exclusively only call pass plays when we've got 10 or more yards to go (67.2% of all attempts). Looking deeper into success rates based on the down yields some more interesting info: 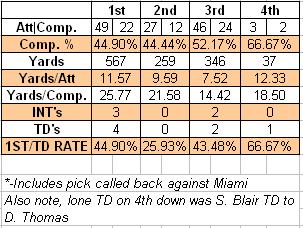 The table breaks down all of the basic stats like attempts, completions, TD's, and picks but I also added another interesting fact. It's the 1st Down/TD rate per attempt or the GREAT SUCCESS rate. To me, it appears we're taking more risks on 1st and 3rd down while simply trying to pick up yardage on 2nd down. 2nd down seems to be our offense's least favorite down.

Concerning the gunman, Josh Nesbitt has had a pretty good year for not throwing too terribly many easy passes. I'm pretty sure he'd have some super inflated stats in an FSU or NCSU type offense with tons of dumps, slants, flares, etc.. Nesbitt is throwing bombs. Period. Average per attempt is just shy of 10 yards. Average per completion is more indicative of what he's being asked to do as it's a whopping 18.6 yards per completion. Big plays.

I think a lot of outsiders wonder why we don't distribute the ball more. I think this is mostly attributed to confidence in receivers. Who are Nesbitt and CPJ confident in to make the play? If it's not a play call to a specific A-back, I'm pretty sure Josh is looking for Bay Bay. How do I know? Here's how: 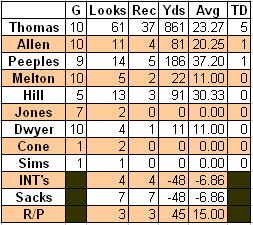 Demaryius Thomas gets all of the looks. He's also the guy that is making plays for Josh. I wish I could pull up drops but the play-by-play stat keepers only logged 4 drops all season and I know there've been a lot more. But if you wanna see a more visual example of what I'm talking about look at these pie charts: 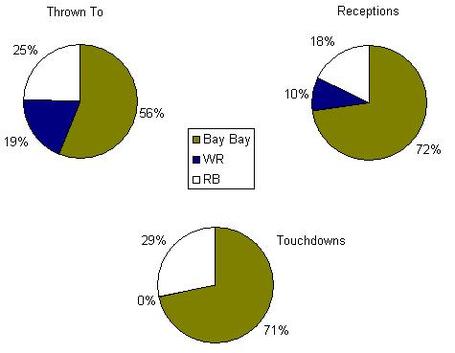 Thomas gets 56% of the balls but has 72% of the receptions and 71% of our total receiving touchdowns. I know this has a lot to do with play calling. The A Backs are mostly the recipients of wheel routes and deep passes while Bay Bay gets a majority of the underneath routes but still. We need some more pass catchers to step up.