Where and When CPJ gives you the ball

Share All sharing options for: Where and When CPJ gives you the ball

The earlier post today was about overall play calling. I think it's pretty evident that our players all have unique skills, strengths, and weaknesses. So breaking down the running backs even further gives us some more interesting information about the Georgia Tech offense. First off, I wanna show a chart with the breakdown of which positions are getting the ball with respect to field position. I put Roddy Jones, Lucas Cox, Anthony Allen, Embry Peeples, and Marcus Wright into the A-Back category. I placed Preston Lyons and Johnathan Dwyer in the B-Back category for carries. And, of course, Nesbitt is the only QB that's received legit action at QB. I didn't factor in Jaybo Shaw, Orwin Smith, or Richard Watson because they haven't seen significant carries when games were actually hanging in the balance. Sacks are not counted in the running stats either (as they shouldn't be). Here's the chart by percentage: 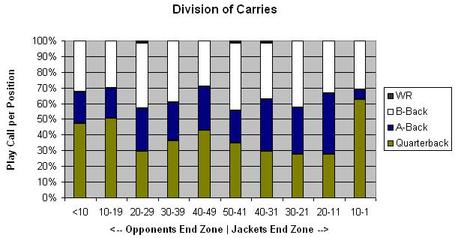 It's kinda interesting because CPJ's just doing what we all knew back when NCAA 2003 came out - the QB dive is unstoppable when you need 1 yard or need to get out of the shadow of your own goal post. I tried to break the chart down as close to 10 yards per division as possible. The key fact in this first chart is that CPJ uses his A backs and B backs to get down the field and then uses Nesbitt's legs once the offense is in the red zone. Less pitches, sweeps, and hand offs versus more midline and QB keepers.

The next chart breaks down the play call for specific players by down. And since CPJ has shown a likin' to Nesbitt, Dwyer, Roddy, and AA they all get their own color in the graph while everyone else is lumped into "Others": 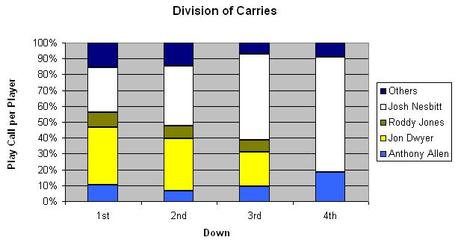 For me, this graph is fairly interesting. The amount of data for 4th down isn't that great so keep that in mind. I'm factoring 241 carries on first down versus only 11 run attempts on fourth down. Dwyer's importance is definitely noticeable in the first down carries. Despite his apparent "drop-off," he is still the guy we go to on 1st down. The guy we expect to consistently gain yardage in order to set up easier 2nd and 3rd downs.

The final graph for the rushing analysis is a comparison of the same group of primary running backs. This is related to distance to achieve a first down or touchdown since play calling is typically predicated by distance to achieve said end result. The chart: 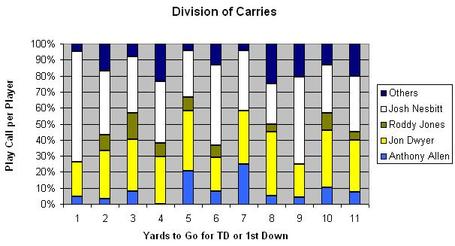 I'm glad to see that we don't get cute too often. It's either Dwyer or Nesbitt with 1-2 yards to go 80% of the time. Edge plays are more prevalent further away from the goal line. Dwyer basically gets the ball around 20% of the time no matter the distance we have to gain, which is totally cool with me. Let me know your thoughts.