Share All sharing options for: GT Downs and Distance Analysis

I play to win. The kids work hard and put in a lot of time and effort. If we can't make an inch there, we don't deserve to win the game. Shoot, the ball's on the three yard line, give the kids a chance to win the game.


The 4th and short call to go for it inspired me to look into GT's play calling in 2009. I specifically was looking into play calling with respect to down and distance as completely separate variables first. So I factored out punts, field goals, presnap penalties, timeouts, etc.. I also took out garbage time because the play calling is vanilla and play calling changes drastically when the game isn't on the line. The difficult part about taking downs and distance to go as independent variables is that they aren't independent when it comes to play calling. 1st down has been 10 yards 90% of the time this season so that skews the numbers a little bit. In fact, here's the average yardage to go per down for this particular study:

I think it's good to see that our 1st down averages less than 10 yards to go. That means we're in the red zone a good bit and we're not killing ourselves with false starts or holding calls on 1st down. 2nd down is our most conservative down as you'll see in the next table and it's evident in the average yards to go on 3rd down. There's barely a yard's worth of change between 2nd and 3rd down meaning we're keeping it fairly straight forward on 2nd down. 3rd down is by far the most aggressive down because we still have around six and a half yards to go every third down. I'm not hating on our offense at all. We have the best 3rd down conversion percent in the ACC. I'm just comparing Georgia Tech against itself per down. The next table shows what I'm talking about a little bit more clearly:

The above table indicates what we have play called per down in 2009 (e.g. 50 passes on 1st down versus 243 rushes). This doesn't take into account broken plays where Nesbitt scrambles. Sacks are counted as passing play calls, however. POT stands for percentage of the time. I kind of attribute our poor passing to the fact that it's relatively predictable when we're going to pass, which you'll see in the following chart: 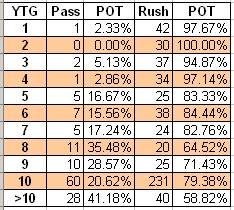 The above table indicates play calls based on yards to make a first down or touchdown. We have passed with 1-2 yards to go ONE time. It was a 51 yard bomb to Demaryius Thomas against Virginia Tech. A pretty good playcall that caught VT completely off guard.

I find the numbers all to be pretty interesting. I wonder if opposing teams do statistical analysis like this. I know the NFL does it because I've heard of Andy Reid, Ken Whisenhunt, and Mike Holmgren analyzing defensive tendencies statistically. I'll work on down and distance data with individual players later (aka Who gets the ball when and where?). Any thoughts are welcome.