What is going on in Tallahassee: an FSU Preview

Share All sharing options for: What is going on in Tallahassee: an FSU Preview

I wish I could answer the title of this preview but I don't think I can. I don't think Bobby Bowden can answer that question. I mean the Seminoles are throwing the ball really well. Ponder, statistically has improved. Their rushing is okay. I really think there is something fundamentally wrong with a team that cannot win at home. FSU's two major losses to instate USF and Miami were in Doak Campbell. They've got something wrong with their psyche when they can't perform in front of 80,000+ people screaming their lungs out. I bet you could hear mice whispering under the bleachers when FSU dropped the USF game.

Onwards and upwards. Let's talk about FSU a little bit. Their scoring has dropped around 6.5 points per game since last season. That's huge, subtracting a touchdown per game. Yards per offensive play has picked up but that's because FSU has had to pass (not run) every game this season to catch up with teams they should be blowing out. Let's look at quarter by quarter scoring for the 'Noles: 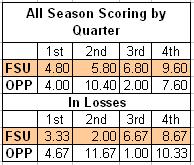 It's tough to use only 5 games worth of data on a team that's as schizophrenic as the 'Noles but I've gotta make due. The 'Noles on average are losing 14-11 going into the half. They are behind the 8-ball with plenty of time to think and worry during half time. Second half adjustments have not been a problem for the 'Noles as they've made up a touchdown per game in the second half. The issue seems to be game preparation. Why are the 'Noles getting beat in the first half by USF, BC, Jacksonville State?

I kinda believe it's like my JV football squad. We've got 4 assistant coaches and no head coach. During games, the kids are told two different things and they don't tell you, "Wait, Coach X told me to do this." They wait until they're on the field, completely lost and then they get burned deep for a TD. Then they say, "Coach X told me to play inside technique no matter what but you said play outside technique when they're in the shotgun so I just played inside technique." Whammo confusion. No unified voice from the coaching staff and you pay with a deep bomb TD. If you don't think this is the case at FSU, then think again.

The players are told divergent philosophies throughout every weeks' practice during position coaching and during film sessions. Then, come game day there are 3 or 4 different groups of players within the same FSU uniform. At half time, they are united by Bobby Bowden in their losing effort and they partially rebound because the assistants are under his direct supervision in the locker room. Come Monday, it's back to complication by division.

I know it's a weird conspiracy theory but that's what I'm thinking is going on and has been for some time. Let me know your thoughts.

Winfield: I have to admit, I'm nervous about this game. Pressure to repeat last year's win, and pressure to make sure that we too, roll over the Seminoles. But, Paul Johnson is the man, and he is my football lord and savior. Georgia Tech 42 FSU 30

Dane: We score on almost every possession. They dick around, finally get some rhythm, but in the end aren't able to catch up with us. 34-24