The O'Leary Expansion and Attendance Stuff

Share All sharing options for: The O'Leary Expansion and Attendance Stuff

I've collected attendance figures since the start of 1996 because ramblinwreck.com started keeping stats in 1996 and I can't find another accurate source for attendance figures. So all data will be pulled from there. Here are the average attendances over the past 13 years of home games: 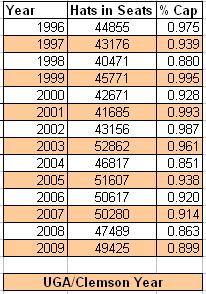 I'm assuming the idea was to bolster Tech's national status but did we really? We increased our place in the ACC from seventh to sixth (pre-ACC expansion) so it's not like we overtook our conference rivals in terms of stadium size. Maybe the number 55,000 sounds just a little bit better to recruits than 46,450. Beats me.

Here are some other interesting numbers about Bobby Dodd attendance since 1996: 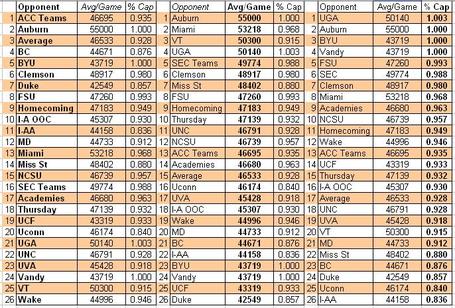 There are three tables merged on that last image. The first list is sorted by name and it includes individual teams, Thursday Night Games, Homecoming Games, SEC Average, ACC Average, All I-A OOC Games, and I-AA games. The second part of the list is sorted by attendance average and this list does not account for the fact that our capacity changed four times since 1996 so Auburn is tops with a lone sellout in 2003. Finally, the last table within the main table is the % capacity list and Georgie is #1 here just like preseason last year. In case you didn't notice, all of the SEC teams are high except Mississippi State (an outlier in other ways as well). 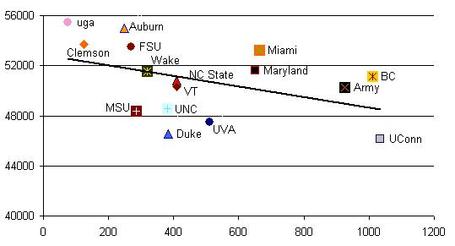 The chart above is a graph of travel distance in miles (x axis) and attendance at Bobby Dodd (y-axis). This is based on 2003-2009 data. It's essentially a graph to show who "travels well" and who doesn't. If you're below the black bar, you don't "travel well" compared to GT's other I-A opponents. You're "below average" for how far away your campus is from Georgia Tech. The BDS linear trend (black bar) basically states that the base attendance is 52,898 people but you lose roughly 4 fans for every mile your opponent's campus is away from BDS. This system is slightly biased towards teams near major cities as I'm assuming most VT alum/fans don't necessarily live in Mountain Village Hell (or Blacksburg as they call it in Virginia).