First, For Whom the Cowbell Tolls takes the loss very well.

I know a lot of people are probably not real happy with the defensive performance but I tend to believe that Dan Mullen is an offensive genius so I'll give us a temporary pass. I think we should be happy with Josh Nesbitt's progression. The O line and Nesbitt got called out on the passing game and they delivered gloriously in an obnoxiously hostile SEC road game.

Defensively, we struggled to defend the pass. However, you can't argue with a unit that either forced a fumble or picked off a pass every 11 plays. No one will beat you when your defense is ball-hawking like that. Also, Jerrard Tarrant is the luckiest man alive. Now, he has a pooch-field-goal-fake TD, a punt return TD, and a fumble recovery TD. Tarrant, you need to return a Christian Ponder interception this coming week to complete the Bouquet of Defensive Excellence.

The Great DC Debate
My concerns are simple. We're giving up a bunch of points and a lot of rushing yardage. Do I think we should fire Dave Wommack? No, I don't. Let's look at the stats over the years of Tenuta/Wommack's careers. It is debatable that Tenuta and Bud Carson were the greatest DC's in Tech history. They both had great defenses, tons of players drafted, and relatively long careers at Tech. Here's a chart of the transition from Tenuta to Wommack: 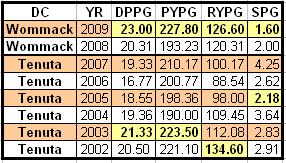 The chart is broken down by DC, year, defensive points per game, passing yards given up per game, rushing yards given up per game, and sacks per game. The worst seasons under each tenure are highlighted in yellow. I kinda believe that since we gave Tenuta a couple years to implement his insane zone-blitz, we should be more patient with Wommack and his 4-2-5 scheme. A lot of fans are impatient, I'm assuming, because CPJ's got an ACC-championship caliber offense with a defense that is more porous than Swiss cheese. We'll see.

Any thoughts are welcome. 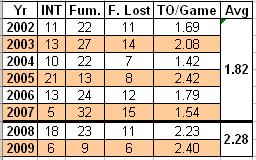