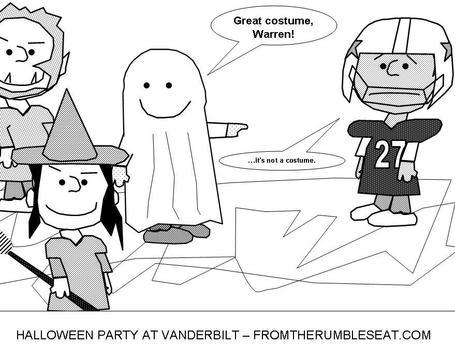 Let's define the state of Vanderbilt football according to Webster's:

Vanderbilt Football [van-der-bilt-foot-bawl] (n) -
1. a futile act or event
2. the smallest or weakest of a litter
3. a football program in the SEC that has only won 16% of their conference games since 2000

Vanderbilt's football team has been bad this season. It's been bad for a while but this year just plain bad. When everyone kinda thought they were turning the corner in 2008, the 2009 season went to Hell in a hand basket with losses to three beatable programs in Ole Miss, Mississippi State, and Army. Vanderbilt's offense is fairly putrid only averaging 16.6 points per game (last in SEC) while their defense is managing to hold opponents to about 17.8 points per game. I'm gonna delve into why this game should not be a problem for Georgia Tech.

Run Vandy, Run
Vandy has played or will play two of our opponents this year: Mississippi State and Georgie. The MSU Bulldogs piled up 260 yards against the Commodores. Georgie accumulated 173 yards in their game against Vandy. For comparison's sake, the Moreno-less Bulldogs have averaged around 100 yards on the ground/game.

The running defense isn't the biggest of their concerns, however. The 2009 Vanderbilt squad struggles when their primary rusher, Warren Norman, is contained. Against a Mississippi State squad that gave up 213 rushing yards and four TD's to GT, the Commodores could barely manage 30 yards of rushing. The Commodores are averaging around 178 yards per game on the ground but if their MSU effort is a blueprint for how to beat the Commodores, then I have a simple message for Wommack, "Contain #27."

Warren Norman is the predominant playmaker for Vanderbilt. He's accumulated 38.1% of the Commodore's rushing yardage. Since the MSU debacle, Norman's productivity has increased to just under 50% of the Vandy rushing offense. Norman and the rest of the Vandy rushing offense have a pretty glaring issue and that's their inability to find the end zone. Vandy hasn't scored a rushing touchdown since September. The offensive line averages out to be pretty experience-heavy. The issue appears to be a lack of athleticism rather than execution. Teams have more depth and athleticism than Vandy and it shows in the red zone.

Vandy Cannot Pass
Any stats can be stretched and manipulated to make a player or team look good. Vanderbilt's passing stats are the lone exception. Vandy is dead last in passing yardage in a conference that cannot defend the pass. If you factor in the terrible sacks given up by Vandy, their offense is only averaging 4 yards per pass attempt. That's pretty futile considering the next worse is Kentucky at almost a full two yards better per attempt.

The interesting thing, to me, is the complete removal of senior Mackenzi Adams from the QB rotation. I think Vanderbilt fans have to be a little disappointed in the appointment of Larry Smith as starter and Bobby Johnson's continual starting of the sophomore. Mackenzi appeared to be the heir apparent with the departure of Chris Nickson but Johnson's confidence was with Smith. And the play of Smith has sent the Vanderbilt season down the tube. Don't expect big things from Vandy's offense. Period.

One Positive - Vandy Can Return Kickoffs
Vandy has a decent kicking game led by the Warren Norman. He's making the plays and has scored twice on kickoff returns. If we score quickly and kickoff to this guy, expect a big play and good field position for Vandy. Norman's got the speed to make plays in the return game and our kickoff coverage, barring last week's rain soaked UVA thrashing, is piss poor.

Predictions
Bird: Vandy gets beat down at home in front of roughly 35,000 Vandy fans. GT 35, VU 10.
Dane: 38-13.
Winfield: In our latest installment of the "Georgia Tech Tour de SEC", the Jackets run all over them while running 2-3 basic formations and not doing anything fancy whatsoever. GT 42 Vandy 6