I was just looking through Yahoo! stuff and checking on random Tech players. It appears Calvin is suffering from a pretty big knee injury. He missed the Green Bay game and had a bye week and most likely will not play against the hapless Rams.

I wanted to reflect on the defensive back talent that Calvin faced in his three years on the flats. Calvin faced off against 39 safeties or cornerbacks that were taken in the 2004-2009 NFL Drafts. Six of those 39 were first rounders. The highest pick that Calvin ever matched up against was Antrel Rolle during his freshman season. Rolle limited Calvin to 10 yards receiving. Only Eric Weddle of Utah and Leodis McKelvin of Troy had similar man-man performances against Calvin. The only other poor performances during his tenure were against teams with great depth at defensive back (uga), double/triple coverage (Clemson), or general offensive futility (UNC).

Another interesting stat was a slight drop off in opposing talent as Calvin grew up. His freshmen year, Calvin faced 21 future draft picks. His sophomore season saw only 16 future draft picks line up against him and his senior season saw 17. I attribute the dropoff to a shift in talent at Georgie, Miami, and VT. It's kinda apparent that Georgie is developing less defensive talent as of late. We all know Miami has dropped off and VT's draft history is sporadic at best.

Now, the NFL Draft is not totally indicative of how talented a player is. He's gotta succeed at the NFL level after he's drafted. I looked up the players and it appears that Calvin still could play against 29 of his former adversaries as they still dress out on Sundays.

The antithesis of talent is typically seen in the Draft as well. Three teams that Calvin faced had 0 draft picks out of their defensive backfield from 2004-2009: Duke, Connecticut, and West Virginia. Against those three programs, Calvin racked up 33 catches, 635 yards, and 7 TD's in only 6 games. It takes talent to stop talent. Here's the list of guys taken in the Draft that lined up against CJ during his time on the Flats: 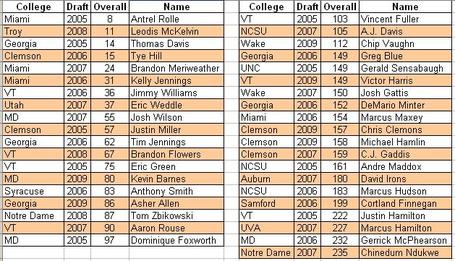 Please note there may be defensive backs drafted from 2004-2009 that didn't necessarily play against Calvin since he left in 2006. They may have played only in 2007-2008 season. Let me know your thoughts.