Here's an interesting article about the coaching history between Paul Johnson and Bobby Johnson. The article mentions that the two have met 8 times as head coaches and talks about the legacy of Southern Conference coaches in I-A football.

I've always been a huge fan of I-AA football so this particular article caught my eye. Here are some interesting facts from the article: The 2001 rematch of Furman and Georgia Southern was Paul Johnson's last game as GSU's head coach. Paul Johnson is 6-2 all time against Bobby, which includes six games at Georgia Southern and two games at Navy versus Vanderbilt.

The most interesting fact that is left out of the article is that Paul Johnson and Bobby Johnson's first meeting was one of the greatest games of all time. Bobby Johnson was promoted to defensive coordinator of Furman in 1983. Paul Johnson became Georgia Southern's offensive coordinator in 1985. Furman only lost one regular season game in 1985 and only gave up 14.4 points per game on the way to a Southern Conference Title. Southern stormed through their independent schedule and averaged 29.7 offensive points per game. The two Johnsons were pretty much destined to meet in the I-AA Title Game.

Furman and GSU exchanged blows for all four quarters until the final seconds were ticking off the clock. Paul Johnson's offense had driven to the Furman 15 yard line. With 14 seconds to go, trailing 42-37, Tracy Ham took a three step drop and hit Frankie Johnson in the back of the end zone to take a 43-42 lead. The clock expired on the ensuing kickoff and GSU defeated their new archrival 44-42 for GSU's first of six national championships. 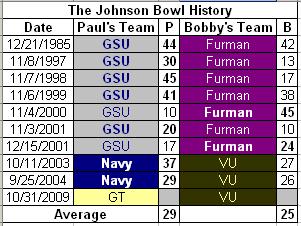