Over the course of the 2009 season, we've posted several predictions for games on our Friday Previews. I wanted to review the predictions and compare them to Vegas lines. FTRS doesn't condone gambling on college athletics. We just think lines/spreads and over/unders are interesting tools to see how the media, fans, and such perceive GT football.

First off, we have the spread or line. This is how many points your team is favored by. If it's negative, that means your boys are favored but positive means you're the Vegas underdog. Second is the over/under. This is the total number of points predicted for a game. People bet on whether or not the total points for both teams will exceed or fall short of this total. For example, everyone taking the over on the GT-FSU game would've won.

So I took predictions from our bloggers and our readers and created some tables and analyzed the predictions. I subtracted the score predictions for everyone's play on the spread. Let's say ChrisInIndy predicted GT to beat MSU 20 to 14, I took that to mean he was picking GT to win by at least 6. The actual spread was GT -5.5 and since GT won by 11 and covered the line, ChrisInIndy won that game. Dane, however, might've picked GT to win only by a late field goal (e.g. he said GT would win 3-0). Dane would lose in this method because his prediction was "less" than the spread while GT covered the spread.

Alright so here are the predictions standings thus far split up by straight up (who did you pick to win?), spread, and over/under:

Now, let's start summing it all up. You'll notice there's a proverbial dance off going on in the prediction department. Here's the current leader board for the 2009 Prediction Season: 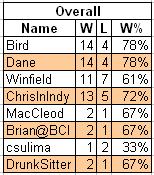 Please note that Dane actually just predicted a "GT must win or we suck" for the UNC game so I read that as GT wins 2-0 in the calculations.

Finally, here's a look at how accurate FTRS bloggers/readers predicted the various games using the three methodologies of straight up, spread, and over/under: