Gotta Pay the Groh Toll to Enter This Boy's Soul

Share All sharing options for: Gotta Pay the Groh Toll to Enter This Boy's Soul

Let's take a look at Al Groh's Coaching record at UVA. We may delve into his Wake Forest coaching but not too terribly much due to the big gap in time between the tenures. First off, Groh has been at UVA since 2001. He's taken his Hoo-team to 5 bowls. His overall record is 59-47 and 36-30 in conference. Groh is 11-9 in BCS out of conference match-ups. The only active head coaches with more ACC games under their belts are Papa Bowden and Mack Brown. Below is a table of ACC head coaches' records against Al Groh: 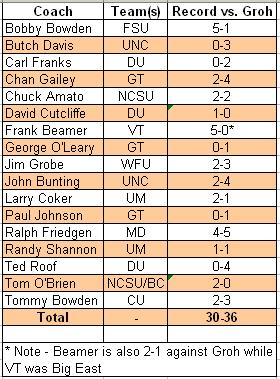 Groh is definitely on the hot seat at UVA despite his recent mini win streak. The opening losses were inexcusable. The inconsistency has been inexcusable. However, he has kept his job lately because of the following: 1) 39-15 record at home 2) Winning record over UNC (second biggest rivalry) 3) Mid season surges.

Under Groh's tenure, the program averages a losing record in August and November and a winning record in September and October. His programs always seem to start slow, build momentum, and then wear down due to attrition. A lot of UVA fans attribute this to poor recruiting and poor preparation. Groh appears to lack the ability to plan in the off-season and needs a few games to adjust his offense/defense. Right now, we're about to hit his team in full-Groh-stride. Honestly, the game worries me. The UVA curse is in full bloom. UVA is streaking. This game could literally ruin our season...and Groh knows it.