It's Homecoming! The Ramblin' Reck Parade

Share All sharing options for: It's Homecoming! The Ramblin' Reck Parade

An original vehicle from the "Old Ford Race"

About 2 hours after the Freshman Cake Race begins the Ramblin' Reck Parade, something that truly embodies the uniqueness and engineering spirit of Georgia Tech. As we've done all week, let's consult the T-Book.

The Ramblin’ Reck Parade originated from the "Old Ford Race" that was held in 1929 and 1930. The Technique sponsored the first race in memoriam of Dean Field’s junked "Flying Flivver," which was the forerunner of the Ramblin’ Reck. The 70 mile sprint from Atlanta to Athens marked one of the rare times Tech students hurried into Athens.

In 1932, after the "Old Ford Race" was deemed unsafe by the administration, the Ramblin’ Reck Parade was created to replace it. The parade consists of three categories: classic cars, fixed bodies, and contraptions (Wrecks). The parade has been an annual tradition for the last 85 years with the exception of 1942 and 1943, due to World War II gas shortages. In 1944, only non-gasoline powered vehicles were allowed in the parade, leading to the entry of human-powered "contraptions." While gas engines were re-introduced to the parade in 1946, the ingenious and spectacular contraptions remained, now powered only by indirect drivetrain. This restriction allows Tech students to demonstrate their creativity and engineering prowess. While the classic cars and fixed bodies divisions are similar to common parades, the contraption category is a tradition unique to Tech. Today, the Ramblin’ Reck Parade is held on Ferst Drive and Fowler Street on the morning of the Homecoming football game. 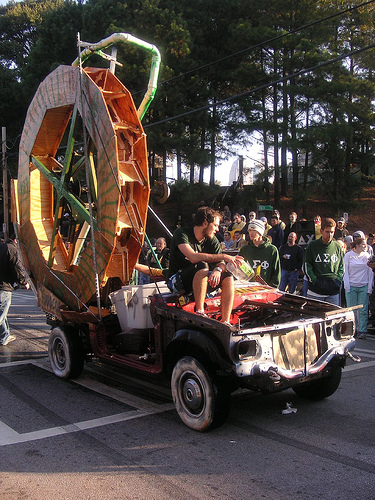 An attempt at a water-powered vehicle

I have never been able to participate in the Reck Parade, instead, I have always helped run it. However it has always been fun to be a part of the experience no matter what the role. The parade this year will begin at approximately 8:00 AM this Saturday. Come on out and enjoy the fun!