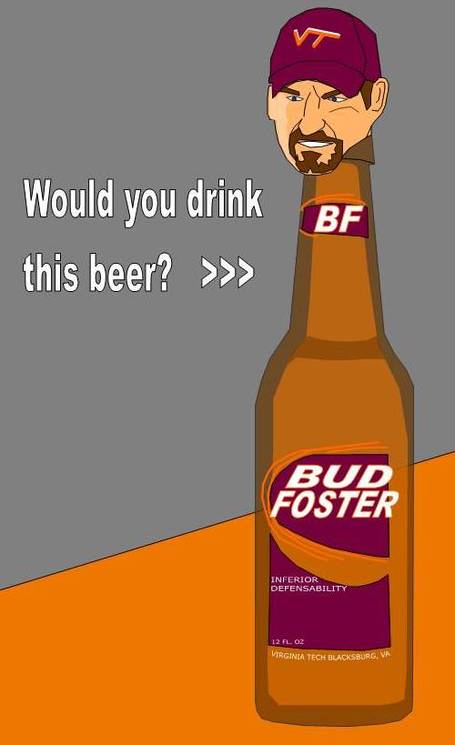 The Hokie Defense led by Bud Foster is one of the best individual units in the country. Their best talent is taking the ball away from offenses that do not protect the football. Bud Foster is their God. He's been there for 23 years. He makes up for lack in recruiting stars by coaching a nasty-ass, blitz-heavy scheme. He builds his players through trial-by-fire experience in Beamer's special teams unit. The average age of his starting defense is 4.000000 years at VT. That's right, his defense on average is 11 seniors. This does not bode well for any offense.

Against the Run
VT's run defense has played two seasons in 2009. The first season was Alabama at the Georgia Dome. The second season was against everybody else. Nebraska moved the football on the Hokies but couldn't punch it in. The three ACC opponents netted roughly half of what Alabama put up on the Hokies (142 yards rushing versus 268 yards rushing). Is this run defense invincible?

Hardly. The VT defense is small and fast and isn't producing the turnovers that Hokie defenses are accustomed to. Nebraska and Alabama gave us some pretty good blue prints on how to beat the Hokies: 1) Run, run, and run through the 4th quarter. The Hokies will wear down. 2) Create short yardage situations on 3rd down by running the football effectively. Miami and BC were below 10% 3rd down conversions against VT. Miami and BC's average distance to achieve a first down on 3rd down was 10+ yards! 3rd and 10 on every 3rd down?!?!?!! Amazingly bad. The game will be won on 1st and 2nd down against the Hokies.

Against the Pass
The Hokies are practicing a little more of a bend don't break defense this year. They're intercepting less balls but are allowing a much lower completion percentage than in 2008. Keep in mind they've faced two of the top four ACC QB's already in Jacory Harris and Thaddeus Lewis. The blitzes seem to have decreased in effectiveness because the Hokies' sack rate has dropped by about 30% against BCS opponents. The drop in pressure in turn has led to an increased rate of attempts without an interception. The Hokies had a sick rate of 14 enemy pass attempts before being intercepted in 2008 and in 2009 it has dropped to 25 passes before a Hokie defender snags a pick.

Defeating the Hokie D
First, don't screw up. They are not All-American talent beating you with freaks and freight trains. They beat opponents because they do not make simple, stupid mental errors. Second, play your game. Jon Tenuta and Bud Foster style defenses try to dictate what an opposing offensive coordinator should call. Screw that. If Foster wants to blitz outside linebackers all day, that's fine. We'll rack it up with the Diesel. If Bud wants to put 9 in the box, we'll throw it to Bay Bay.

I don't think Tech should necessarily struggle with the Hokie D like we struggled with Miami, Clemson, and even slightly UNC. We're talking about a lighter defense with average defensive tackles. The dive will be there unlike it was against Miami, Clemson, and UNC. The edge plays will be tough to make. The passing plays will be tough to make but our 5-10 yard carries up the gut will be there all day. The key will be NO FUMBLES.

Thoughts on the upcoming game are welcome.