Share All sharing options for: VT Preview: An Offensive State of Mind 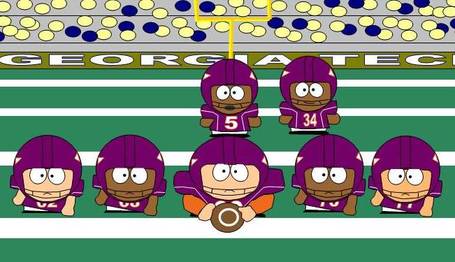 So starting off with that, let's start breaking down the most important game of the season so far. And the first facet we're looking at is the apparent "weak link" of the Hokies. The Hokie Offense. The first set of data I pulled was from their BCS opponents last year so 8 ACC teams, Nebraska, and Cincinnati. I felt like this gives us a pretty good sampling of the Hokies squad last year. You can see the progression from 2008 to 2009 when comparing the big time opponent stats:

The Hokie offense has improved in all the major categories except for rushing yards per game. They're throwing the ball more efficiently, converting third downs at a decent clip, and actually scoring 10 points more per game. How do we know the Hokies have become more balanced and have actually improved as an offensive unit?

I was looking at average rushes per game. The 2008 Hokies lost every game that they did not rush at least 40 times last year. This year the Hokies are 2-1 in games with less than 40 rushing attempts. Tyrod Taylor [supposedly] can throw.

Hokies QB #5
A look at Tyrod's progression as a quarterback reveals that he has improved drastically against an arguably tougher slate of opponents. A good example of Tyrod's maturity is in his passing yardage spike. He finally realized that his 2008 average of 5 yards per carry is a lot harder on the body than sitting back and hitting receivers for a 2009 average of 9.6 yards per attempt. All in all he is accumulating about the same yards per game as 2008 but he is doing it smarter (through the air). Not to mention he's turning the ball over a lot less. He's increased all the way up to 104 attempts per INT versus a 2008 average of 1 pick every 24 attempts.

O Line
The offensive line for the Hokies is not getting the rushing yardage that we're used to from the Hokies. This could be attributed to Darren Evans injury or it could be the two gaping holes on the offensive line filled by freshman David Wang and redshirt sophomore Jaymes Brooks. The O line has also given up 17 sacks in 6 games, which bodes well for Derrick Morgan's efforts. At 2.8 sacks per BCS opponent, the Hokies are on pace to match their 2008 total of 31 sacks against 11 BCS opponents (2.8 sacks per game).

Conclusion
The Hokies passing game has progressed. The Hokies running game has regressed. At home, the Georgia Tech secondary and linebacking corps will have to be ready for Tyrod's scrambling ability and improved decision making. We need to use the Dodd to our advantage. The weather will be pleasant. The fans must be a factor.

Thoughts are welcome on the upcoming game.