The Chaos that May Be the Coastal Division Race

Share All sharing options for: The Chaos that May Be the Coastal Division Race

Since the 2005 division system, three teams have dominated the Coastal: VT, GT, and Miami. From 2005-2008, the three teams have combined for 60 wins versus the bottom three only combining for 30.

I broke down every teams ACC wins/losses per week since 2005. Here's a table that shows the ACC Coastal Race since 2005: 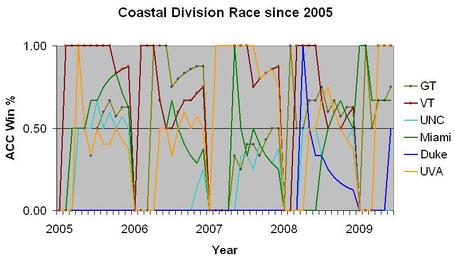 Hence, the importance of this week's homecoming matchup. It's time for a changing of the guard. People are tired of Beamer Ball reppin' the ACC on the national stage. No one wants to see A+ special teams, A- defense, and B- offense. Everyone wants to watch A+ offense while the rest of the team chills on the sideline. That's my opinion and I'm sticking to it.

Here's a question telegraphed in by one of our most hardcore fans:

Dear Bird Flu [stop], What happens if GT beats VT [stop] and GT, Miami, and VT all win out with one ACC loss? [stop] Who wins the Coastal? [stop]
Hugs and Kisses,
Jerry J. [stop]


Good question Jerry. Let's look at the tie breaker policy on theACC.com. There are eight rules for a tie in the ACC title hunt. Here they are:

The tie breaker rules go in order of fairness. #1 is simple. Who won the games played amongst the tied teams? In this case, it'd still be a tie. #2 would also be a tie because everyone would only have 1 loss. #3 would be a tie as well because everyone played and beat/lost to the team with the best overall record in the division. #4, #5, & #6 are still a tie because the Atlantic is terrible and we're all gonna win our Atlantic games. #7 is where we should fret because in this case a win over VT would drop VT below us in the rankings but Miami would still be above us. Then, if we're similarly ranked, Miami would still beat us out because they beat us head-head.

Everything could be a huge cluster if all three teams win out. However, we'd prefer everyone win out over the possibility of us beating VT and them falling into a state of disrepair and losing additional games. A tie breaker with Miami = Miami instant win. So VT is only allowed to suck on October 17th and must play ridiculous football from then on. I'll leave you with one last chart. A graph of the running ACC winning percentage since the inception of the Coastal Division: 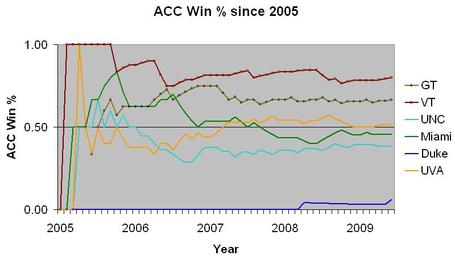