The simulated data has been tabulated. The teams have fought their epic duals of statistical analysis. Here are the results: 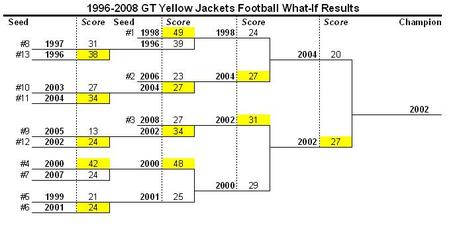 Astonishingly, A.J. Suggs is a superb playoff quarterback. He took his 12th seeded 2002 team straight through the tourney like a hot knife through butter. The 2002 squad knocked off two teams quarterbacked by Reggie Ball, one by Josh Nesbitt, and one by George Godsey. The 2002 squad's defeat of Paul Johnson's 2008 team was by far the biggest upset of the tournament. We all knew the 2006 squad was terrible at closing out games. Any thoughts on the tournament? Who do you think is the best Georgia Tech team you've ever seen play? Personally, I think the best GT performances I've ever seen were the 2006 victories over Maryland, Miami, and VT.