Winning Percentages through the decades

Share All sharing options for: Winning Percentages through the decades

A friend of mine sent me this about 2 days ago. What can you pick out of these graphs? 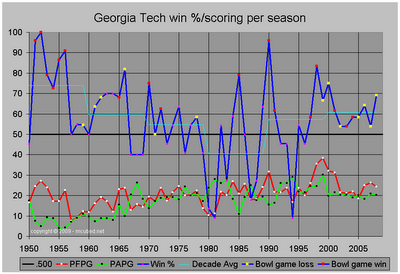 From 1904-1966, Georgia Tech was a dominant force in college football. The Yellow Jackets had just three coaches during that span and looked to be the "Notre Dame of the South" (yes, that used to be a compliment). Since that time, the Jackets have gone through 9 head coaches in search for the one to bring us back to glory.