I'm on a touchdown per play kick right now. I'm digging deep into ramblinwreck.com's data to pull out some more interesting information for all the GT fans. I had to truncate my data diving to CCG/CPJ Era players and players with a minimum of 100 touches. This means they played in 2002-2008 seasons and the data includes their 1999-present statistics. Even the non-stat people will like some of the basic observations about this list highlighted in yellow. 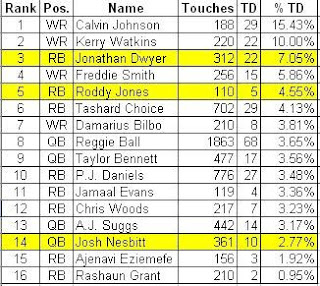 The data is broken down by rank in this system, position, name, # of touches, touchdowns (receive, return, rush, pass), and % of touches that result in a touchdown. I really don't want to do the negative version (turnovers per touch) but I think I might eventually.

Josh's stats seem rough compared to Reggie's because Josh doesn't get credit for good reads that go the distance while Reggie did get credit for good passes to Calvin that went for 6. An interesting comparison is the backfield comparison of Reggie/Tashard/PJ versus Josh/Diesel/Roddy. The Chan backfield trio went the distance 3.54% of their offensive plays while CPJ's backfield trio goes the distance 4.73% of the time. This doesn't account for the Cox Bros., Rashaun Grant, or Chris Woods but I think it's interesting.

I'd also like to note that anyone doubting Calvin's greatness can look at the stats. He took it to the house once every 6.67 plays. Greatness. And in case you were wondering, Calvin's average is one touchdown per 7.82 plays in the NFL.

As a supplemental group, here're some guys that I thought I could also provide data on. They were legit role players who didn't make the 100 touch limit I set for the first data grouping. 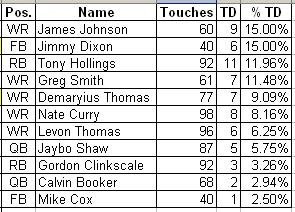