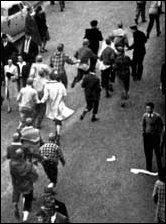 One of the many traditions that freshmen were required to participate in, shirt tail parades were always quite the spectacle for onlookers to witness. Freshmen would form a tunnel after every game for the team to run through while departing the field. Then, if the team was victorious, the freshmen would parade around the streets of Atlanta, many times ending up downtown at Five Points for a pep rally. These parades were sponsored by Ramblin’ Reck Club and Georgia Tech cheerleaders. Participation in the shirt tail parades was taken very seriously, and if freshmen were caught skipping, they would be taken to RAT Court and put on probation. One of the most notable shirt tail parades occurred in 1956 before the game itself was ever played. Governor Marvin Griffin sought to disallow the Tech football team from competing in the Sugar Bowl as the opposing team fielded a black player. When students discovered the governor’s stance, they decided to take action. The shirt tail parade set off towards the Capitol, located just a short distance from campus, only to discover that the governor was at his residence, several miles away. Undeterred, they continued their march to the Governor’s Mansion, where they burned and hung him in effigy. The governor finally conceded to the students’ demands and allowed the football team to make the trip to the Sugar Bowl.

The organization of the parades is pretty crazy to think about. As we all know, we won that Sugar Bowl and you can view the trophy in person at the Edge Center. 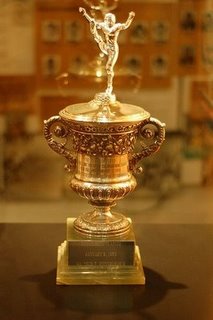 "T-Book Tutorings" is brought to you in anticipation of the 2009-2010 T-Book, the ultimate guide to the history and traditions of Georgia Tech. The book is published by the Ramblin' Reck Club.

Any good shirttail parades or any good parade stories out there?