Today, T-Book Tutoring will showcase two individuals from Georgia tech whose names are familiar but backgrounds could be hazy to the public.

Called "the most dangerous runner in the country" as a freshman, Clint Castleberry left more than just an athletic legacy. In 1942 he placed 3rd in the Heisman voting behind two seniors. This finish is still the closest a freshman has ever come to winning the coveted trophy. The following year, Castleberry left Georgia Tech to fight in World War II with the intention of continuing his football career after completing his service. During the war he was stationed in Africa, where he co-piloted a B-26 Marauder known as "Dream Girl." In the early morning hours of November 7, 1944, Lt. Castleberry took off from Roberts Field in Liberia to continue a ferrying run up the coast towards Senegal, accompanied by another B-26. Neither of the two planes were ever seen again, despite an extensive six-day search involving American and British search crews. On November 23, 1944, all crew members were officially re-classified from "Missing In Action" to "Killed, No Body." His number, #19, is the only number ever retired for Georgia Tech football. 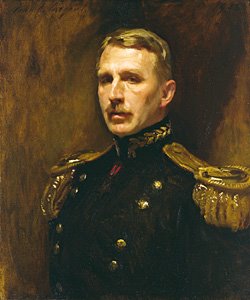 Leonard Wood was one of the earliest famous alumni of Georgia Tech. Initially a graduate from Harvard Medical School, Wood immediately joined the United States Army, was sent to Arizona, and was instrumental in the capture of the famous Geronimo. Due to his valiant service, he was awarded the Congressional Medal of Honor. In 1893, Wood was transferred to Atlanta to serve at Fort McPherson . While stationed in Atlanta, he enrolled at the Georgia School of Technology to receive his Master's degree. While he was at Tech,Wood became the captain of the football team as well as the acting coach of the squad. He led the team to Tech's very first victory, a 28-6 triumph over the Georgia Bulldogs. Following the rout, the ever-classless Georgia fans began throwing rocks at the team as they made their way to the train back to Atlanta. Wood was injured during the attack, receiving a large gash on his forehead. In a display of his mettle and fortitude, Wood cleaned his wound and sutured and stitched his own face.

After his time at Georgia Tech, Leonard Wood served as the personal physician to Presidents Grover Cleveland and William McKinley. Once the Spanish-American War broke out in 1898, Wood, under the direction of Teddy Roosevelt, helped form the legendary Rough Riders. Wood was promoted in the field to Brigadier-General and led successful engagements in the Battles of Las Guasimas, Kettle Hill, and San Juan Heights. At the conclusion of the Spanish-American War, Wood was appointed military governor of Cuba from 1899-1902.

During his later years, Leonard Wood's life was just as busy and full of adventure. After leaving Cuba, he was promoted to Major General and was transferred to the Phillippines. There, he became commander of the Philippines Division and eventually served as commander of the Department of the East. In 1910, Wood was appointed as Army Chief of Staff - he remains the only medical officer to ever hold a position on the Joint Chiefs of Staff. Leonard Wood died in 1927 from complications during surgery intended to remove a brain tumor. He is buried in Arlington National Cemetery, and Ft. Leonard Wood in Missouri is named in his honor.


Two thoughts: 1. You can view Castleberry's RAT Cap in the Georgia Tech Alumni Association and 2. What Leonard Wood a badass or what?

"T-Book Tutorings" is brought to you in anticipation of the 2009-2010 T-Book, the ultimate guide to the history and traditions of Georgia Tech. The book is published by the Ramblin' Reck Club.