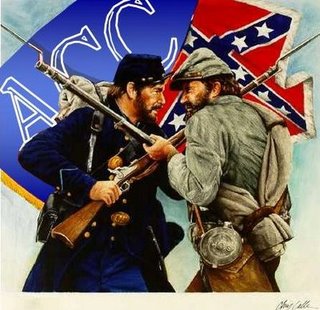 In an interesting twist on Monday, the ACC recalled its decision to stage the next couple of ACC baseball tournaments in Myrtle Beach. The decision came down not necessarily from the ACC's head Swofford but from the national NAACP.

The national chapter of the NAACP isn't happy with the flying of the Stars and Bars in Columbia. The NCAA has an official ban of SC hosting post-season events due to the presence of the flag but the ACC initially did not adhere to this rule citing it as unfair to SC.

It kinda sucks though to punish a struggling Myrtle Beach for the ways of Columbia and the Midlands. I'm not saying this is totally analagous but it's similar to ATL being punished for the idiocy that occurs in the town 75 miles east of Atlanta. I personally think Myrtle Beach should've retained the host status of the games with some stipulations but so goes life. The backwards logic of "pride > revenue" never surprises me in South Carolina -- hence unemployment, refusal of stimulus money, and now the ACC tourney...

I'm kinda pissed 'cause I only get to see the Jackets maybe once or twice during baseball season. Myrtle Beach is literally 45 minutes away. So now, after teasing me, the ACC goes and rips out my heart. Damn them.

Seeing as this is a pretty uncensored blog, any political/economic/social thoughts are welcome...