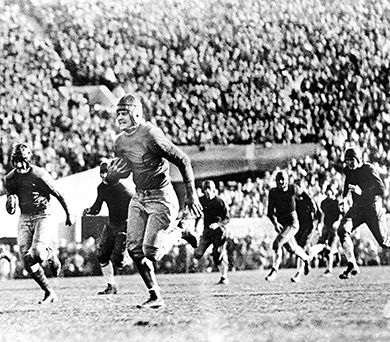 On slightly more negative note, I've decided to turn my attention to turnovers per touch or simply: How many plays does it take before a specific player turns the ball over?

My biggest concern and a lot of fans' concerns about the option we are running revolves around the sheer volume of fumbles increasing because our number of carries is increasing and/or the pitches are dangerous. I think it's a hotly debated issue and probably shouldn't be. I personally think our fumble rate is more dependent on the backs running the offense than the offense itself. A prime example would be Joe Burns the fumbling machine versus Tashard Choice, a man who hardly ever fumbled. So do not crucify me when you notice Nesbitt, Dwyer, and Roddy at the bottom of this list. Once again, same criteria of 100 touches during the CCG/CPJ Era. 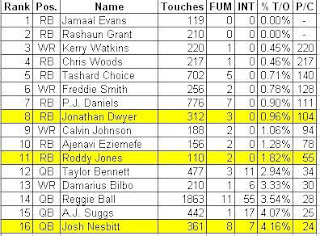 I think Nesbitt is hurt by the transition period of CCG->CPJ. The other issue is that a lot of Nesbitt's fumbles are poor QB-center exchanges. And Nesbitt haters/Jaybo lovers can't find much solace in this chart. After tabulating all of Jaybo's stats, he has a very high 5.75% turnover rate.

I will admit several flaws in the system. It only penalizes lost fumbles not total fumbles. It also penalizes QB's for tipped interceptions. So goes life. The stats are in their names so they go down in history as their turnovers.