ACC Media Day as a Predictor

Share All sharing options for: ACC Media Day as a Predictor

Predicting an ACC Division Champion is like predicting the weather. You kinda think it's gonna rain because it's cloudy. There's a 90% chance it'll rain (BC/VT) but sometimes the rain gives way to blizzards (Wake) or sunshine (GT). Here's a quick breakdown of preseason picks from the ACC Media Days in July since 2005 (full expansion). 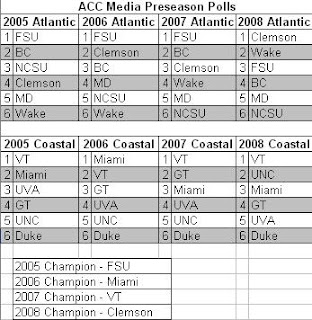 For historical and logical reasons, FSU and VT are typically the preseason favorites. What's fun is seeing the major blunders of the ACC Media and how their hype kinda destroyed our respectability last season. Who knew Clemson would suck? 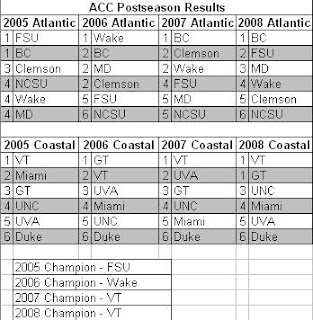 The biggest jump in the black was Wake's ridiculous 2006 ACCC run while Clemson and FSU managed to blow themselves in 2008 and 2006, respectively. Interestingly enough, the media is fairly accurate averaging around 0.83 places off per team wth Wake being the least predictable team in the ACC followed closely by BC. 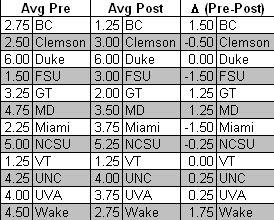 What's nice to see with the Delta is that GT is in the black. I'd much rather be sitting in VT's place where they average a 1st place prediction and average a 1st place finish every year but finishing above expectations is much better than constantly letting your fans down (we're looking at you Miami).

I like Ponder and the FSU defense better than NCSU's Glassman Wilson. BC is up there 'cause of their annual ACC clinic on defense. GT-VT is the game of the year for the Coastal (in ATL gives Tech the edge). UNC is like NCSU in the Coastal and hinges too much on the health of their QB. By midseason, I see both both UNC/NCSU's QBs missing starts due to injury resulting in L's.