Share All sharing options for: Tracking the NCAA baseball field

I play a lot of Risk. One of my favorite graphs from post-game stats on the computer versions of Risk was the Percent of World Population vs. Time Graph at the end of the game. It showed the eb and flow of the game's momentum, big battles, and major defeats. Here's my Risk World Population Graph for the NCAA baseball tourney: 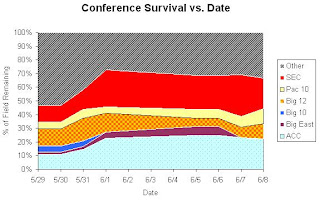 I think it's an interesting graph because you see the major dropoff in Non-BCS teams following regional play. However, later in the tourney the elite Non-BCS schools have stuck in there and remain strong as Hell up to CWS play. This graph still has the Texas/TCU game as unplayed so take that into account. Note the pop and fizzles that are the Big East and Big 10. Also, note the ACC's consistent 22-25% since 6/1. Pretty impressive. It's clearly been an ACC-SEC conference showdown this post-season so why not dwell on the comparisons.