Georgia Tech is a decent schedule away from contending for the BCS title.
-- Southern Pigskin

A decent schedule?! Have you seen who we play this year?!

Now, now before you spit all over yourself in anger, take that comment as a compliment. More and more the BCS rewards those who don't take risks. Play OOC cupcakes, win, make money, play in the MNC. Matter of fact, don't even leave your stadium for those games (see Florida). The reward for beating a strong OOC BCS team is far less than risking a loss and thus, not worth it.

This view is shared by FSUncensored over at Tomahawk Nation who goes deeper into the numbers as he always does.

My theory is that teams should play the weakest possible non-conference schedule, because it is the pre-season rankings combined with a 0 or 1 loss season that gets a team to the National Championship. Additionally, playing cupcakes allows teams to rest their starters, leaving them less exposed to injury. Further, playing bad non-conference teams forces the national championship contender to have a greater focus on the conference games, which could potentially be overlooked when balanced with a difficult non-conference schedule.
--FSUncensored

So let's look at Tech's schedule and how it compares to the past BCS champions' schedule shown over on TN. I'll help you out: It's not a very difficult schedule. 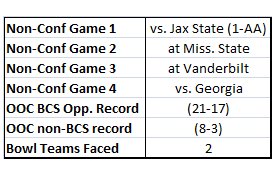 Our schedule is a "tough" one with 2 away games vs. SEC opponents and 1 home game against Georgie. Our only cupcake is the Jacksonville State game. This is completely against the philosophy of the BCS title contenders. When it comes to debates of conference strength and who is the best, I think the best way to answer those questions is to look at OOC schedules. Beating up on each other within conference should only go so far in this argument.

Is it a tale of 2 wants? A championship in Atlanta would be a dream come true, but with a schedule like ours, history is against us. Do fans complain about easy scheduling from outside schools simply for enjoyment's sake? And then are content with the cupcake schedule for their own teams? It's something to consider. Part of all this issue is a result from the subjective decisions made by human pollsters who watch only a few games a week at most (yet another reason why the blogpoll is better). No one wants to appear like they got it wrong, and if the team with the big name wins, no matter the opponent, that team is going to get the bump up the polls.

Such goes the life of a college football fan.....