As an environmental engineer I like to look at pollution numbers, energy efficiency, consumption, waste, etc.. So something that has interested me as of late is the distance-to-travel for ACC/SEC teams. I took Atlanta as a central point for ACC comparisons while Athens (the cesspool) is the center of the SEC world. Just for the Hell of it, I also came up with an interesting scenario.

Obviously, Miami, BC, and MD don't help Tech fans with driving times. But then again the ACC is spread so thin across the East Coast that removing those three teams only makes the ACC slightly worse than the SEC's actual average driving distance. When arguing conference supremacy, the SEC can definitely state proximity as a huge plus. Hell, I would've gone to almost every game if the average drive was only 4 or so hours. Then again, you can't really fly into most SEC cities anyways so you better be willing to drive.

Regional/Dream/Ridiculous Scenario
I've kind of been toying with the idea of a playoff that involves MASSIVE conference realignment across the board. Regionals divided up by proximity. The goal is to save energy, reduce transport time, and ultimately save money. I don't have the regions completely sectioned up but I think by 2050 or whenever gasoline has to be rationed, we'll be seeing something similar to this. Like the 1910's schedules where Tech would only go to one road game and teams would only play 5-6 games a year. I'll work up a post on this when I have more free time.

If Tech were to take its 11 closest I-A opponents to form a new ATL-centralized conference, the conference would include: Tech, Georgia, Auburn, Clemson, UAB, Troy, Alabama, Tennessee, South Carolina, MTSU, Vandy, and FSU. Think about that. That's a lot of natural rivalries that could be reborn. Georgie, Auburn, and Clemson are obvious. Alabama brings back images of the epic Bryant-Dodd danceoffs. FSU is always close and ridiculous. Tech fans generally trust UT about as far as we can throw Phil Fulmer. The others are good fillers. The average drive time would reduce from the ACC's staggering 8 hours to a manageable 3 hours. Damn, that would be nice.

Interestingly enough, in the 50's an "Airplane Conference" was proposed by members of the current Pac 10, the Service Academies, and other dominant East Coast teams (like GT). The idea, at the time, was to create a super conference but the Pentagon didn't like the idea of flying college football teams back and forth across the country all season. 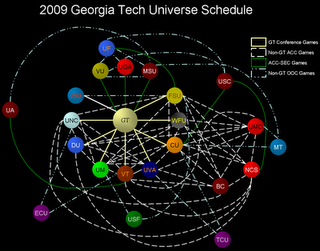 Now, I've been trying to explain to people why you can't use season stats to explain college football teams. I like using NFL stats generally moreso because of the parity and talent depth at the pro level. To me, college football is much more reliant on individual game performances and matchups less so than the NFL, which is moreso about warroom coaching and consistency.

In college football, you have many factors that lead to the rise and fall of college football teams. A major factor is "Who have you played?" or "Who have they played?" A look at the GT Universe Schedule shows the intracacies of the GT schedule. Momentum can be garnered or totally lost merely a game before someone plays us (read: one loss in CFB can ruin a season). The Universe Schedule also shows how comparable teams are to one another through the idea of "common opponents." That's a big time NCAA basketball buzzword but I like the idea for CFB as well since no one ever really likes to stray out of their region.

Any thoughts out there? I'm thinking the entire US should be broken down into 12-16 regionals to coincide with a major playoff configuration.