Share All sharing options for: To Hell with Georgia: Turner Field Edition

Tech and uga meet tonight at the House that Smoltz built. The rivalry renews for its 345th edition and 7th game at Turner Field. Tech actually has an abysmal record at Turner Field going 1-5 with a current 3 game losing streak at the Ted. This year's different though. This year Tech walks in with some hot hands (4.64 team ERA) and high flyin' bats (.325 team average). Opponents are hitting .261 against us and have an awful 8.43 ERA against Tech.

Georgie is 2 games back of Florida in the SEC-East division race and is sportin' a 34-17 overall record. The dogs are led offensively by Rich Poythress who is pushin' a .392 batting average with 21 homers. Georgie has 94 homers in 51 games compared to Tech's 96 homers in 46 games. Tech already defeated Georgie at home once this season and the first game of the series (at Tech) was rained out. 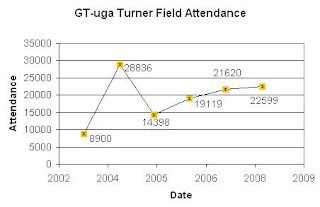 Edit: I didn't realize Zach von Tersch was pitching. Georgie is done-fer. Anyone know why Zach didn't pitch against FSU? FYI, Georgie is pitchin' a freshman against us. Are you afraid of this guy???