Share All sharing options for: A Great Weekend Recap 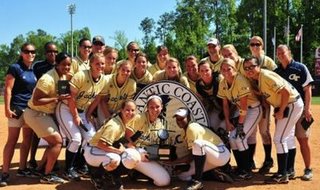 It was a great weekend to be a Georgia Tech fan.....

Congratulations to GT Softball as they have won their 3rd ACC Tournament Championship in school history! The Jackets held off a comeback bid from Florida State in the 7th inning and eliminated the Seminoles. Kristen Adkins pitched the complete game and improved to 23-7 on the year. 5 Yellow Jackets made All-ACC Tournament.

The next step for the GT team is the NCAA Tournament. The ladies received an overall 14 seed in the tournament and will host an NCAA Regional in the inaugural year of their new stadium! Three teams will come to Atlanta May 15-17: Iowa vs. Auburn and Boston University will face the Jackets.

Deck McGuire proved to be his stellar self on Friday, settling down and shutting down the Seminoles in 7+ K fashion. Saturday was gut wrenching as Mark Pope blew the game wide open and failed to get the job done.

Sunday proved to be just as nerve racking but with the opposite result. The 'Noles brought in a 5th infielder in the bottom of the 9th but it didn't matter, as Tony Plagman's hard groundball was too hot to handle and scored the winning run. The win lets the Jackets not only win the series against Florida State, but also regain control of the Coastal Division. Thank you NCSU Wolfpack!

And last, but not least, Women's Tennis dominated their Regional consisting of Denver, Jackson State, and Ole Miss. They move on to College Station, TX the site of the rest of the tournament and they will face National #8 Seed California on May 15th.

Hats off to Amanda McDowell as she battled out a hard fought match to beat her opponent. She lost her first set and then the trainer had to come out to see her before the second set. In the second set she seemed to have limited mobility but stayed with her opponent and fended off four match points before winning in a tie break to preserve the Jackets 3-1 lead. Her second set win was a big psychological motivator for the team and she was leading in the third set when Christy Striplin clinched the match.