Share All sharing options for: Dwyer's Case for the H-Man Trophy Part II 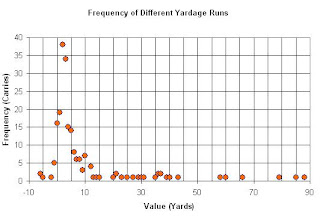 I like completely objective statistics. Like total touchdowns or total yardage per game. Things like that. So here're some interesting stats broken down for Dwyer across last season that should show he's gonna be a force to reckon with. I took Dwyer's rushing/receiving stats off each box score and broke down some critical info for your perusal. 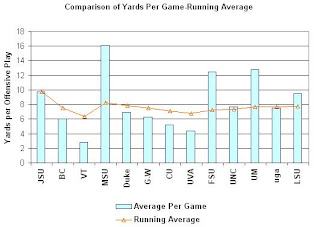 Workhorse: Averaging 7.8 yards per play on offense is not as important as actually accumulating first downs as the GT b-back. Dwyer is capable of the big run but also runs for 4 yards or more 43.4% of the time (3 carries of 4 yards = first down). His consistency is undeniable averaging less than 5 yards per play in only one game last year (VT in which he was injured). Big Plays: Dwyer racked up 23 plays over 20 yards or more not to mention that over 18.0% of his plays are equal to or greater than 10 yards. 6.3% of his total plays resulted in touchdowns, which seems like very little but is quite efficient for a big ol' runningback.

Career Stats/Records: According to Jon Dwyer's ramblinwreck.com profile, he will need 2,235 rushing yards to tie Robert Lavette's record set in 1984. He will also need 23 rushing TD's to tie Lavette's career TD record. If he were to tie or break these career records, he'd be beating single season records as well as no Tech player has ever eclipsed 2,000 all-purpose yards in a single season. Currently, Jon is 7th all-time at Tech for career rushing TD's and 10th all-time for rushing yardage. Meeting or surpassing these records WOULD BE HUGE. Mentioning these records is huge optimism on my part but Hell we've got 99 days 'til someone kicks a football off the tee so I'm allowed to be optimistic.