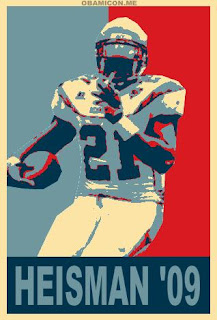 Thanks to Mash on the Gas for starting the blog snowball effect. Also, thanks to UNC blog Tar Heel Fan for showing me the link to Obamaicon.ME. I'm hopin' for a Dwyer Heisman. Here's a breakdown of the Modern Era* runningbacks' Heisman and pre-Heisman years: 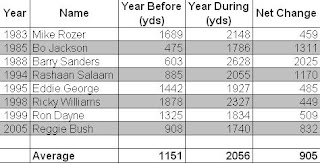 So Dwyer is well on his way at 1419 yards in his sophomore season. A net increase of 900 yards from Dwyer's pre-Heisman year to actual Heisman year seems insurmountable. Reaching the average Heisman rushing yardage in the Modern Era* would require Dwyer increase his rushing total by 637 yards, which appears to be another daunting task... We shall see.