It was pretty big weekend across the Georgia Tech softball and baseball diamonds.

The Softball team's historic season ended against the Washington Huskies on Sunday. In all honesty, the Huskies were just the better team and rightfully deserve to make the trip to Oklahoma City. They will play the mutts from Athens. I hope they beat 'em good. Needless to say, we are proud of our softball team. The inaugural season of the on-campus softball field (AKA "The Mew") was a grand success. We look forward to next year!

Oh, and after further review from this previous discussion, Danielle Lawrie was not quite what we all hoped her to be, but the team as a whole was lookin' pretty solid. 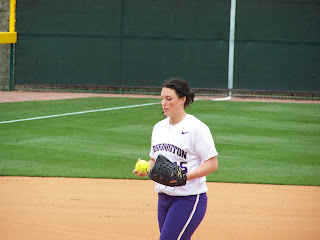 
The baseball team ran in to some trouble over the weekend in the ACC Tournament but that can be overlooked thanks to the NCAA Tournament seedings. Atlanta was selected as a host and GT was granted yet another Regional #1 seed. The invitation to the tournament is the Jackets 3rd consecutive and 23rd in 25 years.

In addition to Georgia Tech, three more schools will battle it out to advance to the Super Regionals:
#2 Elon University (Wes Durham's alma mater)
#3 Southern Mississippi
#4 Georgia State--The Jackets will play against the Panthers this Friday at 7pm.

The winner of the Atlanta regional is slated to play the winner of the Gainesville Regional, hosted by the National #8 seed Florida Gators. This pairing tells me that a lot of weight was put into the RPI of the schools and less weight was put into performances towards the end of the season. Playing the #8 National Seeded region would make us the technical #9 seed, which means we were the last team to miss the National Seed.