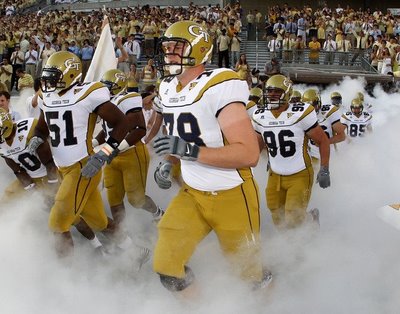 This is a little late in posting but it's worth discussing. Athlon Sports is counting down to their release of their 2009 Annual by unveiling their Top 25 and we are ranked #22. Click here for the link.

So much for all that talk about how Paul Johnson’s "gimmick" offense might be successful in the I-AA ranks and at a Service Academy but is in no way fit for the big time.

...might want to add in "high school offense" as well.

Johnson has called Dwyer, who would be a tailback in a pro-set offense, the prototype for the B-back position with his blend of straight-ahead power and breakaway speed. Tech fans should expect another monster season from the 6-foot, 228 pounder.

This seems to be pretty low compared to other projections and polls. Some current notables the Jackets are ranked behind are Utah, Michigan State, North Carolina, LSU, and Nebraska. With the amount of returning players, you would expect a slightly higher ranking. When the "official" polls come out, I'd look to be somewhere between 15-20 however I don't think this "low ranking" is a that big of a deal. Rather, I am perfectly fine with us flying in under the radar and having low expectations again.

But in the end, we all know poll rankings don't matter. It's about winning ball games and that all starts September 5th followed by consecutive Thursday Night Games.