I was thinking about draft picks today and who GT should be sending to the NFL. It got me wondering about ACC draft picks in general (as it did for Tomahawk Nation). Let's assume NFL draft picks are a legitimate method of quantitative analysis for talent.

Since 2000, the ACC has had 269 players drafted (excluding supplemental), which is around 30 per year. The addition of Miami, VT, and BC increased our talent pool tremendously. The increased interest of a twelve team conference increased the yearly average of picks of the old nine from 20 picks/year to 25 picks/year. So anyone that says the addition has negatively affected the average quality of ACC players or ACC play in general is dumb. Actually the only loser right now in the expansion is Miami but that's an entirely different story. 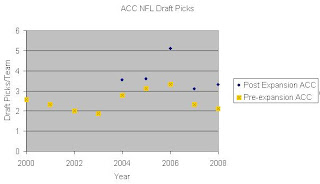 Now, what does it take talent-wise to win in the ACC? Here's a linear regression based on ACC draft picks/year related to total wins/year: 0.375*(NFL picks) + 5.7584 = Total Wins. So basically, no draft picks equates to about 5-6 wins and each draft pick on your team gives you a third of a win. Not too bad. 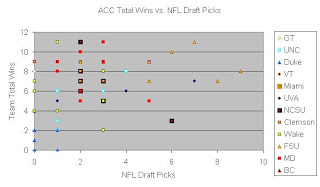 Using draft picks as an indicator of coaching prowess (winning more with less) is also interesting. If you were to take the draft picks required to win and rank the programs since 2000, here's what you'd get (years with 0 picks = 0.9 picks and BC stats only back to '04/Miami and VT back to '03):

Looking at the numbers, I can see why Amato, Bunting, Bowden, and Coker were terminated. They were collecting talent but not winning. Now, you must also account for the fact that this is a logarithm with a ~10-11 win plateau while your number of draft picks can go up to 85 (if you're Team America). Hence, VT appears to be poorly coached but in actuality wins a lot and gets a lot draft picks.

Gailey's termination came because he wasn't getting that extra win. Maybe developing 1 or so more NFL prospects a year would've meant Gailey'd still be at Tech. You never know.